Dodd-Frank Has Crippled Our Economic Recovery. This Bill Would Unleash Real Growth Again. 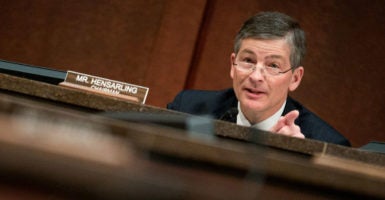 Have you noticed that free checking accounts are now nearly nonexistent, and locally owned stores are increasing the $5 minimum charge on debit cards?

These are not the result of some financial conspiracy. They are a direct result of Dodd-Frank regulations.

After the financial crash of 2008, President Barack Obama decided to increase the role of the federal government in the economy and impose massive new regulations on banks. As one might assume, this hasn’t worked out so well.

Included in the over 3,500-page Dodd-Frank bill are rules restricting access to credit for investors and homebuyers, raising lending costs for entrepreneurs, and making it harder for small businesses to get capital to start or grow.

The bureau doesn’t have to get spending or regulation approval from anyone in Congress, and the White House has no say over who the director is, and can’t fire or put checks on the bureau’s leaders.

Practically speaking, the president of the bureau has more autonomy and unregulated power to regulate than even the Treasury secretary or the IRS director.

In summary, Dodd-Frank has been cited by economists as the primary reason America has had a historically slow economic recovery since 2008.

Enter the Financial CHOICE Act (or the Creating Hope and Opportunity for Investors, Consumers, and Entrepreneurs Act), which was introduced this April by House Financial Services Committee Chairman Jeb Hensarling, R-Texas.

According to the House Financial Services Committee website, the bill would:

… end taxpayer-funded bailouts of large financial institutions; relieve banks that elect to be strongly capitalized from growth-strangling regulation that slows the economy and harms consumers; impose tougher penalties on those who commit financial fraud; and demand greater accountability from Washington regulators.

There are three major benefits to the CHOICE Act:

1. Repeals the most harmful parts of Dodd-Frank.

The CHOICE Act repeals most of Title I and all of Title VIII of Dodd-Frank. These were the most harmful sections that solidified the “too big to fail” policies that led to massive taxpayer bailouts. Additionally, it would repeal Title II, stopping the government from seizing troubled financial firms and putting them back in the hands of a time-tested bankruptcy system.

The CHOICE Act would fundamentally reform the Consumer Financial Protection Bureau by putting it under congressional oversight and a proper appropriations process. It would also rein in the Federal Reserve’s emergency lending authority, making it more difficult for the Fed to conduct bailout-style loans. In addition, it would put any new major rule by financial regulatory agencies to congressional approval as part of the REINS Act (or Regulatory from the Executive in Need of Scrutiny Act).

The CHOICE Act would unleash small business creation, innovation, and entrepreneurship by eliminating rules that limited capital formation over the last few years. It would also strengthen penalties on Wall Street for engaging in fraud, insider trading, and other corrupt practices.

The Democratic Obstacle to Reform

The CHOICE Act will go to a full floor vote in the next few weeks. The major obstacle to passage is the Durbin Amendment. This amendment, which is part of Dodd-Frank, is a price control on debit card swipe fees that banks charge to retailers.

When someone uses a debit card, they are charged what is known as an interchange fee, which goes directly to the bank that issued the card as payment for facilitating the transaction.

The Durbin Amendment placed a cap on interchange fees, thus limiting the compensation that banks can receive from them.

Liberals justify the Durbin amendment with hollow rhetoric, saying “it helps consumers” or that “small businesses benefit.” But the reality is that it’s simply a price control that limits small businesses and entrepreneurs from thriving, and it should be repealed.

Congress has a responsibility to let free markets thrive and lead to economic prosperity. Conservatives should support efforts to roll back these damaging Dodd-Frank regulations so that our small businesses can have the freedom to truly flourish.