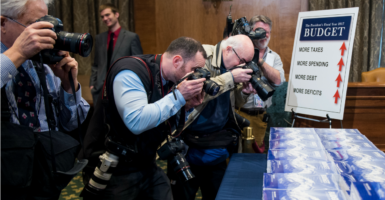 Photographers snap pictures of President Barack Obama's budget proposal. But so far, Congress has failed to agree to any budget. Now some conservatives call on lawmakers to skip one altogether. (Photo: Bill Clark/CQ Roll Call/Newscom)

To put Washington’s fiscal house in order, an organization inside the conservative Koch network is pushing Congress to skip a budget and move straight to a two-year spending bill instead.

Dubbed “Stop, Cut, and Fix,” the plan calls for a continuing resolution that would fund government in fiscal years 2017 and 2018 at current spending levels and then set up a spending cut in fiscal year 2018 according to limits imposed in the 2011 Budget Control Act.

By funding the government for two years, Congress would suspend the annual threat of a government shutdown because of disagreements between Democrats and Republicans. That could buy enough time for lawmakers to rework the mechanics of the budget process, said Andy Koenig, a senior policy analyst with the business group Freedom Partners.

“This gives them an opportunity to do process reforms,” Koenig told The Daily Signal, “move into 2018 knowing what spending levels would be, and hopefully get Congress on that normal budget path.”

Freedom Partners is a more conservative version of the U.S. Chamber of Commerce, funded in part by Charles and David Koch, the politically active and libertarian billionaire brothers.

Republican leadership has made a priority of funding the government through regular order—that is, passing individual spending bills one at a time to fund distinct government agencies.

That effort appears to be faltering as time is running out. The House and Senate have finished work on just three of the 12 spending bills. Lawmakers have until Sept. 30 to fund the government or risk a government shutdown.

“Let’s be realistic, they’re not doing a budget. Probably, they’re not going to finish more than a few appropriations bills,” Koenig said.

He predicted lawmakers are “going to do a CR,” or continuing resolution, a stopgap spending measure that locks in federal spending for a particular amount of time.

Rather than negotiate that spending deal days before a potential government shutdown, the Koch network of donors and activists wants lawmakers to begin work now. Conservatives regularly complain that last-minute spending agreements only increase the size of the federal debt.

Before Congress goes on July recess, Koenig said, Freedom Partners is trying to raise the profile of the issue to avoid any impromptu spending increases.

The plan would establish spending cuts before the November elections and would go into effect in fiscal 2018, which begins Oct. 1, 2017, regardless of which party controls the House or the Senate.

Koenig paints a bleak picture if Washington fails to cutback on spending, a habit he warns could lead to “the bankrupting of America.”