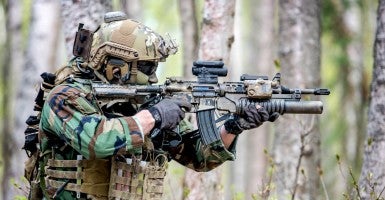 The military’s budget should be used to pay for things that are vital to protecting the country. (Photo: Staff Sgt. Edward Eagerton)

The defense budget should be used to pay for things that make our country more secure and help the men and women in uniform accomplish their mission. Unfortunately, some in Congress use this funding as a piggy bank for their own unrelated priorities.

In fact, for the current fiscal year, Congress took almost $500 million from the defense budget to pay for nonmilitary research projects. This is the wrong way for Congress to operate, and is particularly concerning given how seriously underfunded our military currently is.

The U.S. military is in rough shape due to crushing budget cuts over the last five years. Marines are pulling parts for F-18s off of planes that are in museums. The Air Force is cannibalizing some planes to keep others flying. And our Army and Navy are at historically small levels. At the same time, global threats are only growing.

While all this is happening, Congress continues to loot the defense budget for its nonmilitary priorities. In the current fiscal year, Congress took at least $495 million from the defense budget to put toward other priorities, from alternative energy research to medical research. And there’s at least another $491 million in research funding that only might be useful to the military. Altogether that’s almost $1 billion in funding for research that either definitely does not support military operations or, at best, might be useful.

Meanwhile, the Marine Corps says it has a $354 million shortfall in operations and maintenance funding. The Army says it is short by $425 million for maintenance and $1.4 billion for training. And the Air Force and Navy have similar challenges.

The military’s budget should be used to pay for things that are vital to protecting the country.

The senators and congressmen who have taken this money from the defense budget to spend on these unrelated projects will argue that their priorities are important. For example, these figures include $200 million in funding for breast and prostate cancer research. But should this research be funded out of the military’s budget?

All of this is bubbling up now because Sen. John McCain, R-Ariz., included language in the National Defense Authorization Act that would prohibit the defense budget from being used for nondefense research.

This is the right policy, and one that has been recommended by Heritage analysts. Unfortunately, Sen. Dick Durbin, D-Ill., has offered an amendment with a number of other senators to remove McCain’s language. In effect, the Durbin amendment would reinforce Congress’ bad habit of using defense funding for other priorities.

McCain has the right idea. The defense budget should be used to fund things that are vital for national security. The military is already stretched thin and is in serious need of funding for necessary training and maintenance. Diverting more money away from the men and women in uniform is the exact wrong policy.