Gun Seller Choked Off From Bank Finally Gets His Account 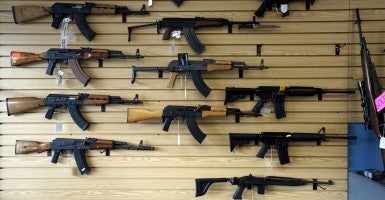 After initially being denied because of his line of work, a North Carolina gun seller gains access to financial services. (Photo: Rick Wilking/Reuters/Newscom)

Less than three months after being denied access to a bank because he sells firearms, a North Carolina gun seller said the bank reversed its policy and offered him the financial products he needs to run his business.

Lichterman had maintained personal accounts at HomeTrust Bank since 2012. He said it wasn’t until a banker discovered that he sold guns that they refused to offer him the automatic clearing house payment service.

Without it, Lichterman said he would have been forced to process payments for guns and other accessories using a credit card processor, which costs 4.5 percent of every transaction. Luke Lichterman, co-owner of Hunting and Defense in Tryon, North Carolina, said he would like to see the banks “stop censoring” his business. (Photo courtesy Luke Lichterman)

“I would have been unable to continue doing business at credit card rates because the internet is the most competitive marketplace on earth and a dealer will buy a gun from one guy because it’s a dollar less than another,” he said. “Being able to do these transactions and save the 4.5 percent of every transaction, you do a $1,000 transaction, you’re looking at $40.”

The Daily Signal sought comment from HomeTrust Bank, but it has not yet responded.

Originally suspicious of a connection to Operation Choke Point, Lichterman asked the banker in March for another example of an industry that HomeTrust Bank wouldn’t do business with.

“I really had to stop from laughing,” Lichterman recalled in an earlier interview. “I said, I’m not a pornographer. I deal in constitutionally protected goods.”

Lichterman said he decided to accept the olive branch and stay with HomeTrust Bank. On May 20, Lichterman said, he received his login credentials.

The Daily Signal sought comment from the Justice Department about the current status of Operation Choke Point. It has not yet responded, but back in April, it said the department “has not and will not target businesses operating within the bounds of the law.”

Republicans in both the House and the Senate have attempted to take down Operation Choke Point or similar initiatives for more than a year now. In February, the House of Representatives passed a bill that would prohibit the program with bipartisan support. In April, two weeks after The Daily Signal shared Lichterman’s story, Sens. Ted Cruz, R-Texas, and Mike Lee, R-Utah, introduced an identical bill in the Senate. That measure has not yet been scheduled for a vote.

In February, the White House publicly opposed that bill, called the Financial Institution Customer Protection Act. In a statement, the administration said, “Restricting the federal banking agencies in this way could unnecessarily and dangerously hinder or compromise important law enforcement and national security efforts.”

Lichterman said he doesn’t hold a grudge against HomeTrust Bank for its actions, but is pleased that they’ve “seen the light.”

“They discovered after being led to it that no, there’s no reason to deny an honest upstanding young fellow like myself this service,” Lichterman, who’s 75 years young, said.