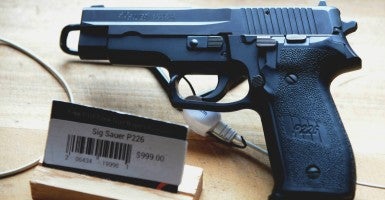 The Second Amendment clearly states that individuals have a right to protect themselves with firearms, and this right might also extend to gun manufacturers. (Photo: Douliery Olivier/Sipa USA USA/Newscom)

Could you imagine being a business owner; selling a legal, functional product; and being sued every time an individual who buys your product uses it to commit a crime?

Families of the Sandy Hook massacre filed a lawsuit in response to the 2012 shooting, attempting to hold gun manufacturers liable for the deaths of school children and faculty. That shooting involved Adam Lanza using a rifle his mother, Mary Lanza, had legally purchased. The lawsuit charges the gun manufacturer, gun distributor, and local gun shop that sold Mary Lanza her rifle with “unreasonable and egregious risk of physical injury to others” and seeks damages.

Now, Judge Barbara Bellis of the Connecticut Superior Court must decide if federal law blocks the lawsuit. Back in 2005, Congress passed, and President George W. Bush signed into law, the Protection of Lawful Commerce in Arms Act, which pre-empts—or blocks—state or federal lawsuits against gun manufacturers except in limited cases, such as where the guns were defective, or where the manufacturer was involved in criminal conduct.

If allowed to proceed, lawsuits such as the one in Connecticut could lead to all sorts of other outlandish claims being asserted against producers merely for selling their legal products, even though they rarely have any control over who buys their products or how people use them.

Could the maker of salted peanuts be sued if someone intentionally sneaks peanuts into the lunch of someone else who has a known allergy, and who dies as a result? The situations are analogous, and legally, there’s no difference.

As Professor Timothy D. Lytton of New York Law School describes, while gun control advocates have tried, and failed, for decades to impose liability on gun manufacturers and retailers for crime-related injuries, some courts have begun to open the door to these claims. According to Lytton, there is indeed a concerted strategy by trial lawyers to file more lawsuits against gun industry firms. He says, “[B]y suing sellers and manufacturers, who have deeper pockets than their assailant’s victims[,] [victims] seek to improve their chances of receiving compensation. Victims also view successful tort claims as a way to promote safer firearm designs, to deter future sales to criminals, and to place part of the blame for gun violence on the industry.”

The tactics of the plaintiffs’ bar against the gun industry are hiding in plain sight. In the Connecticut complaint, the plaintiffs’ lawyers refer to guns as a “weapon of war.” They argue that the “[d]efendants chose to sell a military weapon to the civilian market, ignoring the unreasonable and demonstrated risk that its assaultive capabilities would be used against innocent civilians.”

This is not an argument supporting liability per se. Rather, it’s an argument for banning guns in their entirety for any non-military use. Even if the policy were constitutional (which it isn’t), that pitch should be made to legislatures, not to courts.

This is not to undermine the seriousness of the issue or the horror that ensued on Dec. 12, 2012.

Gun violence, like all violence, is no laughing matter, and to those who commit despicable atrocities, justice should always be served.

Gun violence, like all violence, is no laughing matter, and to those who commit despicable atrocities, justice should always be served. But it is wrong to falsely penalize manufacturers for producing a functional product that was lawful for them to sell.

The Second Amendment clearly states that individuals have a right to protect themselves with firearms, and this right might also extend to gun manufacturers. To allow for tort liability here would hinder the exercise of this constitutional right. The emphasis should be on vigorously enforcing existing gun laws, both state and federal, to prevent atrocities like Sandy Hook from happening—not punishing those companies that follow the law.