‘Let Us Provide Our Own Security’: Virginia Beach Manager Petitions for Guns at Work 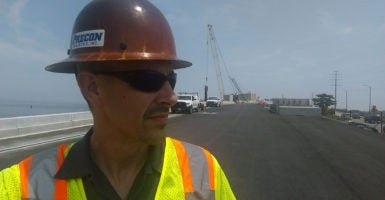 Vincent Smith, construction services manager for Virginia Beach, is pressing his case for city employees to be allowed to carry a concealed handgun at work. Pictured: Smith on the job for a current construction project on Lesner Bridge. (Photo courtesy of Vincent Smith)

Vincent Smith wasn’t in the office when a fellow Virginia Beach city employee opened fire there, ultimately killing 12 and wounding five in the carnage five weeks ago.

After getting notice of the shooting that afternoon in Building 2 of the Virginia Beach Municipal Center, Smith, 49, raced to the nearby emergency operations center, where he helped out until late in the night.

It was soon clear that although law enforcement arrived within two minutes of the report May 31 of an active shooter, the gunman had been able to move through offices and fire at fellow city employees without being confronted by another firearm.

Now, Smith, the city’s division manager for construction services, is taking action in hopes of preventing such a situation from occurring again.

“Their policy failed, and it failed their employees, and we’ve got to do something different,” Smith said of Virginia Beach officials in a phone interview Monday with The Daily Signal. “I’ll take it all the way to the Legislature if I have to.”

Bringing back a petition he started over three years ago to allow city employees to carry a concealed firearm at work, Smith so far has garnered support from almost 5,000 of Virginia Beach’s estimated 450,000 residents, many of them fellow city employees.

Among the petition’s original 260 signees was construction project manager Herbert Snelling, the only person to lose his life in the shooting who wasn’t a city worker. His family described Snelling, 57, as a gun rights activist and a man “who loved Jesus deeply.”

Smith’s petition seeks to overturn a policy that prevents the resort city’s 6,000 employees from carrying a concealed handgun in the workplace.

In his petition, Smith calls such gun-free zones “some of the most dangerous and vulnerable places in America.”

“There’s no law against ordinary citizens owning guns in the state of Virginia,” Smith told The Daily Signal. “But the city of Virginia Beach has an HR policy that prevents the city’s employees from having weapons at work.”

“I think the petition is going to have a voice, and bring enough attention to the issue to hopefully change that,” he said.

Smith, a father of two who has worked for the city for five years, said he was first taught to shoot in the hills of West Virginia when he was 9 years old.

“That’s over 40 years of safely handling firearms, and I’ve never had an accident,” Smith said in a follow-up interview Wednesday. “I have enough training to know that I am capable. And there are many people who work in Building 2 and are in the same position I am.”

“Their way of doing this, which we have done for years and years, unfortunately failed us.”

“Simply forbidding firearms does not work, it does not keep our people safe,” he said. “So I think it’s time to allow employees to protect themselves. People don’t typically walk up to a building where they know that 15% of the workforce has a firearm on them and try something like this.”

Smith, whose office was about a 70-foot walk from where some of the killings occurred, was estimating how many employees might take advantage of concealed carry.

Of the 12 killed, Smith said he knew two well. Of the five wounded, including a police officer, Smith said three are good friends. He said he had passed most of the victims in the hallways at work at some point and said “Good morning” to them—as he had with engineer DeWayne Craddock, the shooter.

Smith said he spoke about the issue at Gov. Ralph Northam’s roundtable event June 24, and will raise it again during the public comment segment of the Virginia General Assembly’s special session to consider new gun restrictions, which begins July 9.

Smith said he is working on a proposal with state Sen. Bill DeSteph, R-Virginia Beach, and Delegate Glenn Davis, R-Virginia Beach. He said he also plans to bring the issue before the City Council.

Most of the 400 city employees who worked in Building 2 have been relocated, Smith said.

“There are people [who worked] in the building who are on the other side of the argument, too, but in the end we all want the same thing, and that’s safety,” Smith said of his co-workers.

“Of the folks I’ve talked to that I know, there’s a wide range [of reaction]; some folks don’t feel safe at all, some do,” he said. “Some want employees to carry weapons, some don’t. Every reaction is valid.”

In 2016, Kansas passed legislation that made it illegal for a public employer in the state to forbid employees to carry a concealed handgun, unless the employer provides perimeter security and metal detectors at all points of entry.

Smith told The Daily Signal that he would be “more than happy” if Virginia followed the Kansas model.

“That would put the onus back on the state,” Smith said. “You either provide security and pay for it, or you let us provide our own security.”

Smith added that he is open to the idea of setting a slightly higher bar for employees who want to concealed-carry at work, such as requiring “proficiency training,” to make sure employees can use their weapons effectively and safely.

The state of Virginia already requires private citizens to obtain a license to carry a concealed handgun.

“There are ways to figure it out, if the people who are in charge want to do this,” Smith said.

He noted that some people in Building 2 that Friday afternoon could have stopped the shooter if they had been allowed to be armed.

“You’re allowed to attend a public event and carry a weapon, so how come you’re not allowed to carry that weapon to work?” Smith asked.

Smith added that Independence Day is a good reminder of the importance of Americans’ constitutional right to keep and bear arms.

“We’re celebrating the holiday where we secured our right to own a firearm and protect our lives,” he said.