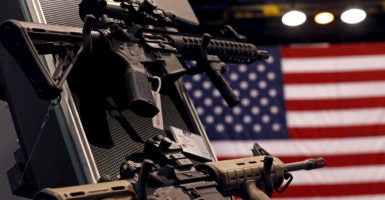 An Iraq combat veteran is getting attention for a fiery speech to fellow members of the Virginia House of Delegates defending the Second Amendment and its supporters.

Delegate Nick Freitas, a Republican elected in 2016 to represent Culpeper, Madison, and Orange counties, is a business consultant and former Green Beret who served two combat tours in Iraq.

After asking permission to make remarks on the House floor, Freitas spoke for seven minutes March 2. A video of his speech went viral after the lawmaker shared it on his Facebook page, and now has more than 13 million views.

Here are seven highlights of his points:

1.  Find Out If Gun-Free Zones Work

“Wouldn’t it be reasonable to test whether or not the efficacy of gun-free zones [has] actually achieved what their intended intent is?” Freitas asked.

Torture, mass murder, genocide, and other atrocities happen “as a result of government systematically disarming citizens and claiming … to be the sole responsible party for their security,” he said. “And then turning on those same citizens and punishing them.”

Guns are a powerful deterrent, Freitas said, and self-defense isn’t limited only to circumstances where a perpetrator ends up killed or wounded.

Americans hold the Second Amendment in “high esteem,” he said, “because we honestly believe that you have an inherent right to defend yourself.”

Freitas said he agrees with lawmakers who are pushing for teachers to be armed.

“Not every teacher,” he said. “But a teacher that is comfortable with it, is former law enforcement, is former military, that is now in the classroom.”

5. Stop Calling Him a Nazi and Segregationist

Political opponents have called him a Nazi and a segregationist, Freitas said in his speech.

In an appearance Tuesday on “Fox & Friends,” Freitas also recounted one instance when he was told he was on the side of terrorists.

“What sort of offense do you think someone like me, with two combat tours, who has lost friends to terrorists, [took] about something like that?” he said.

6. Continue the Dialogue With Mutual Respect

Mutual respect, Freitas said, is key to developing solutions that work and coming to agreements.

“It starts with a certain degree of not assuming that the only reason why we believe in the Second Amendment is because the NRA paid us off, he said, adding:

If that’s the sort of logic you want to use, why don’t you go take a look at how much money the NRA spends and how much money Planned Parenthood spends? When I get here and talk about abortion, I don’t assume that you’re all bought and paid for by Planned Parenthood. I don’t assume you’re horrible people because I disagree with you on a policy position.

In his last point, Freitas reflected on the Feb. 14 massacre at a high school in Parkland, Florida.

“We are going to have a problem with so-called solutions which infringe on people’s liberty under the promise that government will provide for their security,” he said.

“Because ultimately in this last school shooting we had a perfect example of government being engaged over 30 times and still failing to provide security for those students.”