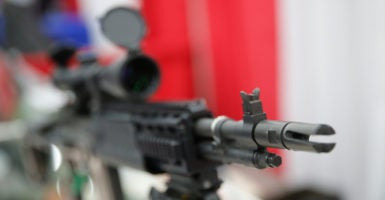 A school district in Minnesota is defending a principal who removed a student from public school grounds for holding an unapproved sign that read, “Guns Don’t Kill People, People Kill People” during a nationwide school walkout demonstration against gun rights.

The incident was captured on a video that was posted on Facebook by Kenny MacDonald, a student at the high school. It has since then been viewed 2.7 million times.

In the video, Lonnie Seifert, the New Prague High School principal in New Prague, Minnesota, is seen confronting the student holding the sign and telling him he needed permission from the school 24 hours in advance to carry the sign.

When the unidentified student refused to let the principal take his sign, citing basic free speech rights, he decided to walk away from the scene and was promptly followed and escorted by the principal off school grounds.

According to MacDonald, the principal threatened to have the police throw the student in the back of a police car. But according to a press release from the school district in response to the viral video, law enforcement was not involved with any of the students present during the walkout.

Kids at our school today walked out, in honor of the 17 students killed in Florida. Students held signs that said, “Arm…

The school district defended the principal’s actions in the press release by citing “time, place, and manner” First Amendment restrictions. According to the statement, the school district’s administration “has an obligation to enforce the policy.”

According to the rule, “time, place, and manner” restrictions are put in place as a way “to protect the exercise of students’ and employees’ free speech rights, [while] taking into consideration the educational objectives and responsibilities of the School District.”

“New Prague Area Schools fully respects and recognizes that students have free speech rights. Those rights, however, are to be balanced against the District’s responsibility to maintain a school environment focused on education,” the statement said.

No students were disciplined.