To Promote Gun Control, the UN Changes the Rules 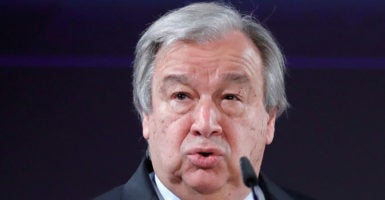 The U.S. should bow out of the U.N. program targeting small arms by giving notice to U.N. Secretary-General António Guterres, here delivering a speech on disarmament May 24 at the University of Geneva, Switzerland. (Photo: Denis Balibouse/Reuters/Newscom)

In the last two weeks of June, the United Nations held another review conference on its efforts to counter what it considers illicit dealing in small arms. The U.S. played the game well. But unfortunately, you can’t beat a cheater.

In theory, this U.N. program might be a modestly useful way to promote cooperation against the illicit international trade in small arms.

In practice, as even the world body has agreed, it does nothing very useful, mostly because most nations at the U.N. are too incompetent, or too ill-willed, to follow through on their commitments.

In 2001, the U.N. began what it calls the Programme of Action to Prevent, Combat, and Eradicate the Illicit Trade in Small Arms and Light Weapons in All Its Aspects. Participants mercifully abbreviate this program as the PoA.

The real point of the PoA isn’t to do useful things, which is why I’ve called for the U.S. to quit it. The program exists to virtue-signal, to provide funds for the nongovernmental organizations that cluster around it, and to allow U.N. delegations to spend a pleasant week or two in New York City every couple of years.

As one delegation put it, the point of the PoA is to keep the party going.

And, by the by, it’s there to serve as a melting pot for every bad, ill-informed, and impractical idea that anyone has about firearms. Those behind it hope that the U.N. program someday will be accepted as the basis for how to implement any treaty that mentions small arms. In other words, they hope to use it as a way to lever all their bad ideas into legally binding form.

Although the U.S. has participated in the PoA since 2001, it has done so on the basis of strict red lines set out by John Bolton, then serving as a State Department undersecretary and now President Donald Trump’s national security adviser.

One of these red lines was that ammunition was to be kept out of the U.N. program on small arms. Participants discussed ammunition in 2001, and agreed that trying to number, trace, and record bullets–which is what we do with firearms–was wildly impractical.

But that didn’t stop the activists. By 2018, as I warned in May, the demand to include ammunition in the program was front and center. And by the end of the third review conference, on June 29, the activists had won a partial victory. Here’s how.

The PoA usually has been conducted on the basis of consensus. That means that, normally, participants don’t hold votes. Instead, negotiations continue until everyone agrees–or, at least, until no one disagrees–with the final “outcome document.”

By the early hours of June 30, the U.S. delegation was still refusing to bow to the will of the overwhelming majority and allow any substantial mention of ammunition. U.S. negotiators were willing, as I foreshadowed in May, to acknowledge the existence of a U.N. General Assembly process on surplus ammunition stockpiles, but that was all.

So the process, by U.S. request, went to votes on the two paragraphs in question. The U.S. and Israel voted against both times, and 62 (and then 63) other nations–from the Third World and Latin America–voted in favor. The U.S. and Israeli objections should have killed the paragraphs, but didn’t.

Instead, the PoA, under its French chairman, simply kept the paragraphs in. Madagascar then called for a vote on the entire outcome document, which was adopted. And that was that.

This procedure was wrong in at least three ways. First, the review conference’s authority expired at midnight June 29, but final votes were not taken until June 30. Second, it appears that the chairman never called the conference back into formal session. And third, of course, the paragraphs on ammunition should have been knocked out by the U.S. objection.

The paragraphs themselves are not unbearably toxic. They acknowledge the U.N. General Assembly surplus ammunition process, and that nations applying the PoA to ammunition may proceed on that basis. The problem, now that “ammunition” has been recognized as being in any way part of the program, is that the next PoA meeting will crack the door open a little wider.

But it’s just as true that ammo doesn’t work without guns, and guns are a lot easier to number and trace. Since most PoA members can’t even manage to do that, the idea that they’ll be able to cope with tracing ammo beggars belief.

The nations that wanted ammunition in the program are celebrating now. But in time, this minor win will look a lot less shiny.

The U.S. has shown, first of all, that it is prepared to push for votes, even if it knows it will lose, which gives us leverage. Most nations–as shown by the fact that only 63 nations voted against us–are not comfortable with contested votes in a process that’s supposed to be based on consensus.

But as far as the PoA goes, this should be the breaking point. The U.S. does almost all the real, hard work of running traces on firearms, providing technical expertise, and giving aid to upgrade foreign record-keeping. Without us, the program may exist in theory, but it will not exist in practice.

The quid pro quo for America was that the PoA respected our red lines. But if we are going to do most of the work and get no respect for it, there is no reason for us to participate.

We also believed that the program was based on consensus, and that, if we showed up, we could at least keep bad things out of it. As that has turned out to be false, there is no reason for us to show up in the future.

That was a bad precedent to set, even if the PoA unfolded more or less independently. The biggest lesson we have learned is that promises of a consensus-based outcome in the U.N. are meaningless. Those promises provide no protection for U.S. interests.

The U.S. delegation to the review conference did a superb job. They could not have been any more stout. The U.N. simply changed the voting rules midstream. There is no way for the U.S. to recover from this, as every other nation (bar perhaps Israel) will proceed on the basis that ammunition is now in the PoA.

The only thing to do is to announce formally to U.N. Secretary-General António Guterres at the General Assembly next fall, and to the incoming program chairman, that the U.S. is quitting the PoA and will give it no further notice.

There is no point in trying to negotiate with a bunch of cheaters, especially when their idea of cooperation is making you do all the work.

Seventeen years ago, John Bolton set the red lines for U.S. participation in this U.N. program against small arms. One of those red lines now has been crossed. It’s time for Bolton, as national security adviser, to enforce that line by taking the U.S. out of the program.