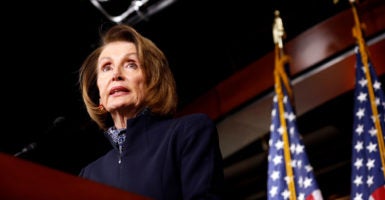 With Pelosi’s support, Democrats coalesced to create a gun reform proposal that would require federal background checks on all gun sales, including private sales, Politico reported.

Democratic California Rep. Mike Thompson, a Pelosi ally who says a bill for universal background checks will be introduced to Congress in early 2019, is spearheading the measure, according to Politico.

The bill will have bipartisan support, according to Thompson, who refused to name GOP members who are set to sign on, but New York Republican Rep. Peter King indicated he will support it, Politico reported.

Mass shootings in 2017, including the massacres at First Baptist Church in Sutherland Springs, Texas, and Mandalay Bay Hotel in Las Vegas, also afflicted hundreds of victims and their families.

“The public has been demanding commonsense gun laws for years,” Everytown for Gun Safety President John Feinblatt said, Politico reported. “The public is ready for the Congress to act.”

Everytown “is a movement of Americans working together to end gun violence and build safer communities,” according to its Twitter handle.

Democratic Connecticut Sen. Chris Murphy maintains Republicans will be forced to accept gun control if they want to make up the losses they suffered at the midterms.

The measure is unlikely to pass in a Republican-controlled Senate.