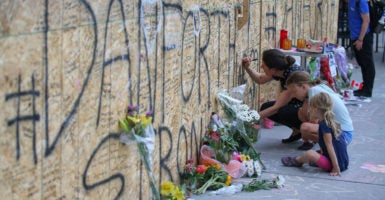 On Monday night, a 29-year-old man opened fired with a handgun on bystanders at a busy intersection in Toronto, Canada, killing two and wounding 13 before being shot to death by law enforcement officers.

Although the man’s motives remain unclear, reports have circulated that he frequented Islamic State-inspired websites and may have lived for a time in either Afghanistan or Pakistan, fueling speculation that this was a terrorist attack.

The man’s relatives have since issued a statement offering their condolences to the victims and noting that the man had long suffered from “severe mental health challenges.” According to the family, these challenges included both psychosis and depression.

If true, the shooter follows a long-established pattern in which 60 percent of mass public shooters have been diagnosed with a mental disorder or demonstrated clear signs of serious mental illness prior to the attack.

In the hours following the deadly incident, Canadian politicians have joined in a debate on the status of the country’s gun control laws, with Toronto Mayor John Tory going so far as to question why anybody would need a gun in that city. At least one other lawmaker has suggested that the possession of firearms be completely banned in large urban areas.

While this anti-gun rhetoric will sound familiar to Americans, Canadians have become particularly acquainted with it over the last four decades as the government has imposed increasingly stricter gun control measures.

Unlike the U.S. Constitution, the Canadian Constitution doesn’t recognize or protect an individual’s right to keep and bear arms, and Canadians have long been subject to a comparatively strict gun control framework.

All prospective firearm owners must obtain a firearms license, which requires not only a criminal background check, but third-party character references and a holistic risk assessment of even noncriminal behavior indicating a threat of violence. Among other things, the individual must pass a firearm safety course and have his or her spouse’s consent for the license.

The majority of legally-owned firearms in Canada are shotguns and hunting rifles. Since handguns are considered “restricted” firearms, they require extra training to possess, must be registered, and must meet certain size and caliber requirements.

While it’s technically possible to apply for a permit to carry a handgun in public, these permits require an extraordinary showing of justification: the person must prove that he is in imminent danger, that police protection is insufficient, and that the possession of the handgun can “reasonably be justified for protecting the individual.”

But, interestingly, the minimum age for gun ownership is 18, regardless of the type of firearm. And for all of its stringent gun laws, Canada still has a relatively high rate of privately-owned guns per capita—a rate that appears to be increasing despite the government-imposed hurdles on gun ownership.

Numerous studies have shown that Canadians haven’t benefited from the stricter gun control measures. According to a 1988 study, the changes in the law decreased the use of firearms in homicides, but did not affect the total standardized homicide rates. In other words, the same number of Canadians were dying, even though slightly fewer were dying from guns.

More recent studies continue to present a mixed picture of success, with one in 2004 stating that the 1977 Firearms Act had “no discernable impact on public safety” and another in 2012 concluding that the data “failed to demonstrate a beneficial association between [firearms] legislation and firearm homicide rates between 1974 and 2008.”

Canada, like the United States, has a significant problem with unlawfully possessed firearms. A 2018 study estimated that there may be as many as 10.6 million illicit firearms in the country, and they are increasingly coming from sources within Canada, not smuggled across the border from the United States.

We don’t yet know how the shooter procured his handgun, but it’s almost certain that it wasn’t legally possessed.

His history of serious mental health problems would have prohibited him from receiving a firearms license, and even if he was granted a license at some point in the past, licensees are “screened on an on-going basis” for red flags that their license should be reviewed for revocation.

Canada’s gun control framework has failed to have a statistically significant impact on crime and to eradicate mass public shootings. The problem isn’t that law-abiding citizens are able to keep and bear firearms, and the solution isn’t stricter gun control to make it more difficult for citizens to defend themselves and others.

Thomas Jefferson understood this. He quoted in his “Legal Commonplace Book” the prescient words of famed Italian criminologist Cesare Beccaria:

The laws that forbid the carrying of arms are laws [based on a false idea of utility]. They disarm only those who are neither inclined nor determined to commit crimes … Such laws make things worse for the assaulted and better for the assailants; they serve rather to encourage than to prevent homicides, for an unarmed man may be attacked with greater confidence than an armed man.

But beyond this truth lies a starker reality—even if Canadian authorities could confiscate the more than 12 million legal and illegal firearms in the country and ensure that not one more gun was smuggled across the border or 3D printed in a basement, it is a well-established fact that individuals bent on death and destruction don’t need firearms to devastate communities.

This should ring particularly true in Toronto, where just three months ago a young man mowed down dozens of pedestrians in a deliberate attack apparently planned out of anger over the lack of attention he received from women. That incident killed 10 people and wounded another 15, without a single bullet being fired.

In fact, these vehicle attacks often cause as much, if not more, carnage than attacks with firearms. Consider just the following:

Severely restricting the ability of law-abiding citizens to protect themselves and engage in other lawful activities with firearms will not stop mass shootings or other forms of public violence. Criminals will continue to have access to illicit guns, and will always have a plethora of other weapons to choose from, like cars, planes, bombs, knives, and fire.

It isn’t “enlightened” to disarm law-abiding citizens under the premise that it will solve human nature and eliminate violence. Instead of doubling down on the idea that guns cause violence and proposing to further deprive citizens of the best means of self-defense, Canada’s political leaders should focus on realistic solutions that protect people from future harm by addressing the root causes of violence.