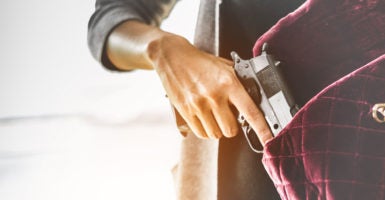 Republican Gov. Phil Scott of Vermont is expected to sign a bill restricting the gun rights of adults under 21. (Photo: Chayantorn/Getty Images)

Gil Gatch is a member of the Young Leaders Program at The Heritage Foundation.

Law-abiding young adults living in Vermont will soon find it much more difficult to defend themselves and their families after state lawmakers passed a bill prohibiting the sale of any firearm to individuals under 21, unless he or she completes a nearly 15-hour hunter safety course with little practical bearing on personal self-defense.

The bill passed despite strong bipartisan opposition, and Republican Gov. Phil Scott is expected to sign it. Scott was previously reluctant to support similar gun control measures, but credits his change in tone to last month’s foiling of a troubled teen’s plan to attack his school.

These severe restrictions on the fundamental right to keep and bear arms handicap the ability of law-abiding Vermonters to act in self-defense, and fail to make them—or their schools—safer.

In District of Columbia v. Heller (2008) and McDonald v. City of Chicago (2010), the Supreme Court struck down statutes prohibiting individuals from keeping operable firearms in their homes.

The court held that the right to keep and bear arms is an individual right that extends beyond a person’s participation in a state militia, and which is centered on a natural right of self-defense.

Currently, federal law prohibits licensed firearms dealers from selling handguns to persons younger than 21. This restriction has been upheld by federal courts of appeal in substantial part because the law doesn’t completely deprive them of their right to keep and bear arms.

Young adults are still able to purchase long guns popularly used for self-defense, such as shotguns and semi-automatic rifles. They can also lawfully acquire handguns from unlicensed individuals who reside in the same state.

Unlike the federal prohibition, Vermont’s new law will entirely strip most 18- to 20-year-olds of access to any firearm, making the right to self-defense contingent upon whether they have a parent or guardian with a legal firearm or can spend an entire day completing an intensive hunter safety course.

But many young adults live on their own and, in some cases, are already married with children.

Further, a person’s right to self-defense is only tangentially related to hunter safety classes, which require knowledge of tree stand safety, survival skills, and how to track injured animals.

Mandating successful completion of this class in order to defend one’s home with a firearm creates a substantial burden for young adults that is not meaningfully related to their self-defense or the general public safety.

At 18, Vermont law recognizes these individuals as adults who can marry, pay taxes, sign binding contracts, and serve as jurors deciding the fates of their peers in criminal cases. Under federal law, they are legally responsible for their actions to the point that they can be executed for them. They are no different from any other class of law-abiding citizen protected by the Second Amendment.

Even if Vermont can constitutionally strip law-abiding young adults of their right to keep and bear arms—a doubtful proposition—it is difficult to argue that recent Second Amendment case law does not protect many of these soon-to-be prohibited firearms as “commonly used by law-abiding citizens for lawful purposes.”

Some of the most popular firearms for self-defense exceed the statute’s magazine limits.

For example, the Glock 17 is one of the most widely used 9 mm handguns in the world, but comes with a standard factory magazine capable of holding 17 rounds.

Other common handguns typically using magazines exceeding a 15-round capacity include the Smith and Wesson M&P .40; the Springfield XD(M); the Beretta M9; the Sig Sauer P320; the Walther Creed 9mm; and the FN 509.

Almost all semi-automatic rifles popularly used for self-defense and target shooting are also prohibited, because they come with standard-issue 30-round magazines.

Although many non-gun owners question why a law-abiding citizen would need a semi-automatic rifle like the AR-15, the reality is that millions of Americans own these firearms for one consistent reason: They are great for self-defense.

The AR-15, and rifles like it, are much easier than handguns to use effectively, particularly for smaller or less experienced individuals. And in the midst of a life-or-death situation, the increased ability to control and accurately aim the firearm is valuable for even the most experienced handlers.

Under Caetano v. Massachusetts, prohibiting these commonly used weapons of self-defense is a blatant and unacceptable violation of the right of Vermonters to keep and bear arms.

Even if every provision of this new law were ultimately determined to be constitutional—again, a dubious proposition—these restrictions are still statistically unlikely to save lives.

First, there is no evidence that restrictive gun laws reduce gun crime. Ironically, this is demonstrated by the fact that Vermont has a comparatively low rate of gun violence despite long being considered a “gun-friendly” state.

Between 2000 and 2011, only 91 people in Vermont died from non-suicide gunshot wounds—an average of roughly eight deaths per year, which include accidental deaths and justifiable homicides.

Meanwhile, firearms are used for lawful self-defense between 500,000 and 3 million times every year—making the low-end estimate for national defensive uses during that same time period about 5.5 million.

Vermont’s 175,400 gun owners represent roughly 0.18 percent of the nation’s 93 million gun owners—meaning that, based on a rough extrapolation, Vermonters likely used their firearms defensively a minimum of 9,900 occasions in those 11 years.

Second, while school shootings are extremely infrequent events in all states, they are essentially nonexistent in Vermont.

Since 1970, there has been only one recorded shooting incident on school property in the state. In 2006, a 34-year-old man involved in a domestic dispute with his ex-girlfriend—an elementary school teacher—entered the school, killed one teacher, and wounded another before fleeing.

Classes were not in session, there were no children on campus, and the handgun did not belong to the shooter.

In other words, no provision of this new law would prevent a similar incident from occurring in the future. The shooter was over 21 and used a “low-capacity” handgun purchased by another person.

Third, there is no evidence that firearms with magazines capable of carrying more than 15 rounds result in higher numbers of casualties in mass shootings. Studies show that shooters typically do not employ fast rates of fire and could have caused an equal amount of carnage with “low-capacity” weapons.

In fact, the deadliest school shooting in U.S. history—at Virginia Tech in 2007—was carried out with two handguns that are legal under Vermont’s new law. The shooter just brought extra magazines and reloaded.

Handicapping the firepower of law-abiding citizens responding to violent threats does not in any way prevent those violent threats from occurring. It just decreases the likelihood that an armed citizen will be able to effectively confront the threat.

Fourth, most gun-related crimes are carried out with illegally possessed handguns, often accessed via straw purchasers. Prohibiting law-abiding citizens from using common firearms for self-defense does little to remove black market guns from the hands of dangerous criminals.

This new law will likely not prevent violence-prone individuals from accessing firearms, but it will, in all likelihood, greatly inhibit the ability of law-abiding Vermonters to protect themselves against such individuals.

It leaves a 20-year-old mother with nothing more than a BB gun or steak knife to defend her home from an intruder, simply because she can’t readily arrange 15 hours of care for her newborn.

It deprives members of the University of Vermont’s Shooting Sports Club of the ability to purchase their own shotguns for skeet-shooting competitions, simply because they may have part-time jobs on top of their course load and can’t easily free up two entire days for a hunter safety course.

It disarms responsible young men who might otherwise respond to violent threats against others, because they work two jobs to provide for a family and can’t afford to miss two full days of work.

It handicaps all law-abiding Vermonters, but especially those smaller or less-experienced individuals who would greatly benefit from the defensive use of popular semi-automatic rifles.

The most devastating reality? It will do these things without making a single person safer.