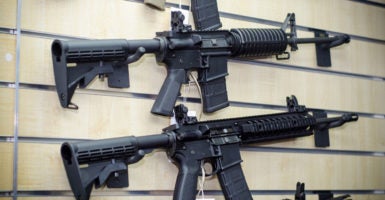 The AR-15 is a preferred self-defense weapon in large part because it is more stable than a handgun, making it easier to handle and fire accurately. (Photo: artas/Getty Images)

“Why would any law-abiding citizen need an AR-15?”

This question has been a favorite talking point of gun control activists in recent months, grating the ears of many lawful owners of the popular semi-automatic rifle.

Never mind that rifles of any kind account for only a fraction of gun deaths every year, or that some of the worst public mass shootings in American history have taken place with nothing more than handguns.

Never mind that the gun has been readily available to civilians since 1963, and yet has only recently been considered a serious public safety threat worthy of a complete ban.

Never mind that the AR-15 is not an automatic rifle, that it is not particularly powerful compared to other “less scary looking” rifles, or that prohibitions on it have shown no correlation to a drop in gun violence.

The reality is that law-abiding citizens purchase millions of AR-15s (and similar rifles) for one very important overriding reason—the same reason, in fact, that law enforcement officers often use them: They are great for self-defense.

The AR-15 is a preferred weapon of law-abiding citizens because it does precisely that: It effectively confronts the violent threats from tyrants, oppressors, and—most often in post-Revolution America—criminals.

Unlike handguns, the AR-15 is braced against the shoulder and has two separate points of contact for the shooter’s hands. This means the firearm is much more stable, making it easier to handle and fire accurately for smaller or less-experienced gun owners—or for any gun owner facing a life-or-death situation. They are easy to use, easy to maintain, and reliable.

On many occasions where armed self-defense is necessary, simply brandishing a firearm will be enough to deter criminals. But sometimes there is more severe need for the average law-abiding citizen to gain an advantage over multiple or heavily armed attackers.

Those situations, though infrequent, do occur—and when they do, the AR-15 can be the difference between living and dying. Consider these recent cases where the AR-15 made all the difference.

A 15-year-old boy saved both his life and the life of his 12-year-old sister by fending off a pair of home invaders with his father’s AR-15.

Two armed burglars retreated from a college student’s apartment after coming face-to-face with an unloaded AR-15. The rifle itself instilled enough fear to cause them to flee.

During the Ferguson, Missouri, riots, nearly all businesses within a particular 2-square-mile area of the city were looted or destroyed—except for one. African-American men guarded the gas station and convenience store of a white friend from looters and rioters. They did so armed with an AR-15, a MAC-10 “machine pistol,” and a variety of handguns.

A target of a drive-by shooting successfully fended off the attack by using his legally owned AR-15 against his three armed attackers. He was able to hit all three men in the moving vehicle.

A homeowner’s 19-year-old son used an AR-15 to defend himself against three would-be burglars who broke into the home in broad daylight. The 19-year-old was later determined to have acted in justifiable self-defense.

After a gunman opened fire on congregants inside First Baptist Church, a man living near the place of worship grabbed his AR-15 and engaged the shooter. The shooter subsequently dropped his own firearm and fled the scene as the courageous neighbor pursued him.

A man with an AR-15 intervened to stop a neighbor’s knife attack on a pregnant woman. The rifle’s “intimidation factor” was credited as a reason why the attacker dropped his knife.

After his 17-year-old relative successfully used his own firearm to fend off three would-be robbers who attacked him in the driveway of his home, a man used his AR-15 to stop a threat from one of the would-be robber’s upset family members.

Law-abiding Americans regularly choose the AR-15 to defend themselves, their families, and their communities against threats of violence. These Americans hope they never have to use that AR-15 on another human being. But they also know that, should the situation arise, they will have one of the best self-defense firearms to level the playing field against any attacker.