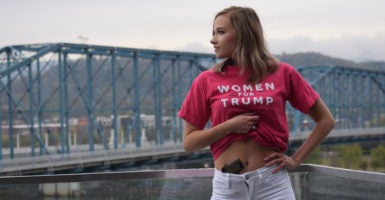 Brenna Spencer, a senior at the University of Tennessee at Chattanooga, reveals her support for the Second Amendment in a graduation photo. (Photo: Brenna Spencer/@BrennaSpencer/Twitter).

A student at the University of Tennessee at Chattanooga used her senior photo shoot to showcase support for the Second Amendment right to bear arms, but not everyone is happy about it.

Brenna Spencer, 22, tweeted out a picture of herself lifting up a pink T-shirt slightly to reveal a handgun in her waistband. The shirt reads: “Women for Trump.”

“I wanted my graduation photos to be personal and to be about my journey,” Spencer told The Daily Signal by text Wednesday night. “So with me loving the Second Amendment and conservative politics, it’s what inspired me to take and post the photo.”

Despite the backlash she has received from the Twitterverse, Spencer told Fox News Channel she has no regrets about tweeting out the photo.

She told The Daily Signal it was a “helpful” experience despite the negative reactions.

“I believe standing up for what I believe in and trying to empower women to protect themselves is helpful,” she said.

One tweet suggested that Spencer take down the picture if she ever wants to be employed. She majored in broadcast journalism and minored in political science.

You realize employers will see this right? Hope you enjoy living with Mom and Dad.

“You realize employers will see this right? Hope you enjoy living with Mom and Dad,” tweeted Lisa Simpson, who goes by Lisa Simpson Democrat on Twitter.

Spencer works at Turning Point USA, a nonprofit focused on conservative activism on college campuses. [Disclosure: The reporter of this story is president of Turning Point USA at Michigan State University.]

Co-workers were quick to point out that her employer supports her and the photo. The founder of Turning Point USA, Charlie Kirk, applauded Spencer in a tweet for exemplifying “real feminism”:

This is what REAL feminism looks like. Strong, smart, confident, and armed

Well done Brenna. You are what @TPUSA is all about

Another employee, Alana Mastrangelo, tweeted out a similar photo with the message: “Here I am in solidarity with Brenna, also carrying in public.”

ABC News called the police on my friend, Brenna Spencer (probably hoping to get a better story).

Here I am in solidarity with Brenna, also carrying in public. We will NOT allow for Leftist intimidation tactics to hinder our inalienable #2A rights. pic.twitter.com/qzv9adtm9G

The comments on Spencer’s tweeted photo range from GIFs, brief video clips, and memes suggesting she get some counseling.

One person called Spencer an “attention grabbing” young woman, while another wrote that she broke the law by bringing her gun near a building with a no-weapons policy. The photo was taken outside the Hunter Museum of American Art in Chattanooga, which bans firearms inside.

“Per the thread, this young female is taking a photo [with] a firearm, in an area [with] a posted ‘no-weapons’ policy,” Silva tweeted. “This showboating behavior is irresponsible, reckless, and potentially dangerous. Signed, A concerned citizen.”

But Spencer told The Daily Signal that she doesn’t see the photo shoot that way.

“My goal was to empower women to protect themselves, [so] yes, I think it was successful,” she said.

This report was updated to include Spencer’s comments.