Yes, Democrats, Sometimes a ‘Good Guy With a Gun’ Does ‘Stop the Bad Guys.’ Here’s Proof. 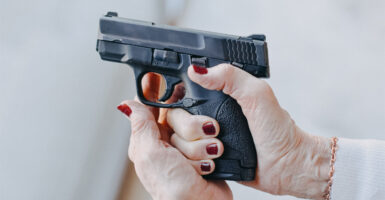 As these incidents from last month show, the reality of armed citizens defending life, liberty, and property never has been more relevant, or more supported by the available evidence. (Photo illustration: Stefania Pelfini/La Waziya Photography/Getty Images)

In a press conference defending the state’s new restrictions on concealed carry permit holders, New York Gov. Kathy Hochul, a Democrat, told reporters last month: “This whole concept that a good guy with a gun will stop the bad guys with a gun, it doesn’t hold up. And the data bears this out, so that theory is over.”

With all due respect to the governor, she clearly hasn’t actually looked at the data.

The examples below represent only a fraction of the news stories on defensive gun use that we found in September. You may explore more by using The Heritage Foundation’s interactive Defensive Gun Use Database. (The Daily Signal is Heritage’s multimedia news organization.)

As these recent cases show, the reality of armed citizens defending life, liberty, and property never has been more relevant, or more supported by the available evidence.

Restricting the Second Amendment rights of law-abiding Americans doesn’t make them safer. It just hinders their ability to protect themselves and others, making them even more vulnerable to attacks by criminals who know their victims are defenseless.