Private Parties Are Held Accountable for Their Actions: It’s Time Government Officials Are Too 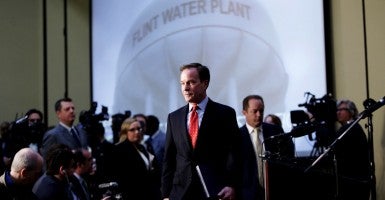 The federal government refused to hold its own officials accountable after the Environmental Protection Agency dumped millions of gallons of toxic water into the Animas River—a blunder that would likely result in a criminal conviction for a private party. Michigan’s attorney general, Bill Schuette, now deserves credit for doing what the federal government didn’t do: file criminal charges against the public officials involved in the lead-contaminated drinking water imbroglio in Flint.

A few months ago, it was unclear whether criminal charges would be brought against various officials who may be responsible for Flint’s leaded water. Many private lawsuits revealed serious harms among the plaintiffs including, “skin lesions, hair loss, vision loss, memory loss, depression and anxiety … concerns about miscarriages, imminent learning disabilities in children and Legionnaires’ disease.”

The government has held private sector workers criminally liable for lesser, comparable misdeeds, but foregone the same accountability measures against its own employees. The U.S. Department of Justice has convinced judges to hold high-level corporate officers responsible for the wrongdoings of employees, even if they were not involved.

Last week, District Judge Tracy Collier-Nix authorized the Michigan attorney general’s first criminal charges related to the Flint water crisis. Filed against one city official and two state officials in the Department of Environmental Quality, charges include Safe Drinking Water Act violations related to water treatment and monitoring, as well as tampering with evidence, conspiracy to tamper with evidence, and misconduct in office.

While Heritage Foundation scholars have argued that mere accidents (like an unintentional water discharge) are better addressed through the civil rather than the criminal justice system, these charges appear to involve intentional misconduct for which criminal penalties may well be warranted.

As former Sen. Howard Baker, R-Tenn., once remarked, “It is almost always the cover-up rather than the event that causes trouble.”

The first Flint charges smack of cover up—Schuette told Flint residents that these “are only the beginning and there will be more to come,” while Gov. Rick Snyder, a Republican, asked whether what happened in Flint was, “actually criminal,” or rather just poor decision-making.

Many have observed that there seems to be two separate legal systems in America: one for government employees, another for everyone else; one typically does not involve truth and accountability, the other far more often does.

The government should not discriminate against private parties, yet unless the law applies to everyone, discrimination is exactly what will happen. In filing criminal charges for the harms caused in Flint, Michigan’s attorney general says, “no one is above the law.”