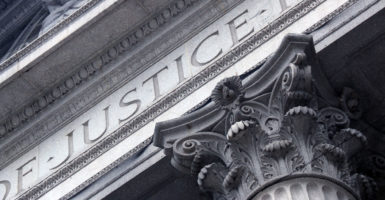 The 9th Circuit Court of Appeals reinstated a California law requiring nonprofits to disclose to the government the names of donors who give over $5,000. (Photo: jsmith/Getty Images)

Should you be forced to disclose your charitable donations to the government?

Is it an invasion of your privacy and a violation of your First Amendment rights if the government requires nonprofit membership organizations that you join and contribute to—such as the NAACP, NARAL Pro-Choice America, the National Right to Life Committee, or Americans for Prosperity—to send your name to the government?

Unfortunately, a three-judge panel of the U.S. 9th Circuit Court of Appeals sees nothing wrong with such invasive mandates in a dubious decision that threatens the ability of Americans to support the causes and organizations they believe in that are an integral part of how our democracy works.

The 9th Circuit is going against the spirit of one of the most famous and important decisions of the Supreme Court during the height of the civil rights era, NAACP v. Alabama (1958).

On Sept. 11, in Americans for Prosperity v. Becerra, the 9th Circuit threw out an injunction issued by a district court and reinstated a California law that requires nonprofit organizations soliciting donations in the state to disclose to the state attorney general all of their members who have donated more than $5,000—regardless of whether they are even residents of California.

The plaintiffs, Americans for Prosperity Foundation and the Thomas More Law Center, were both found in violation of California’s mandatory disclosure provision.

Neither group had submitted a copy of its IRS Schedule B form (which lists all donors over $5,000) since 2001, but it was not until more than a decade later that they received a demand from then-state Attorney General Kamala Harris to file their disclosure forms.

Schedule B is not a public form. While it has to be filed with the IRS, it is not made available to the general public.

Many have questioned the right of the IRS to ask for such donor information, since it is not needed for tax purposes. In fact, the Trump administration has recognized that, and in July, the IRS announced that it will no longer require many nonprofits to file Schedule B forms.

In explaining that move, Treasury Secretary Steven Mnuchin said, “Americans shouldn’t be required to send the IRS information that it doesn’t need to effectively enforce our tax laws, and the IRS simply does not need tax returns with donor names and addresses to do its job.”

So why does the state of California need to know the identity of the donors to charitable organizations? What possible relevance does that have to regulating nonprofits?

The state argued that this information is necessary to enforce the law and protect the public from fraud. However, as the district court pointed out, the attorney general “was hard-pressed to find even a single witness who could corroborate the necessity of Schedule B forms in conjunction with their office’s investigations.”

The district court said that the only “logical explanation” for the fact that both organizations were listed as active charities in good standing for 10 years despite never filing a Schedule B form was that the attorney general had no actual need for the form.

In fact, the investigative unit of the state attorney general’s office confirmed “that auditors and attorneys seldom use Schedule B when auditing or investigating charities” and admitted that they did not need Schedule B forms in past instances in which they conducted successful audits that “found wrongdoing” by charities.

Additionally, once an investigation is underway, “the relevant information [Schedule B] contained could have been obtained from other sources.”

The plaintiffs argued that this disclosure requirement violated the rights of charities and donors to freedom of speech and freedom of association, and would create a chilling effect on donations and the willingness of individuals to be associated with the plaintiffs.

In today’s political climate—characterized by extreme polarization, as well as harassment and intimidation, especially in social media—if these forms become publicly available, then donors who contribute to politically incorrect causes could face significant backlash.

During the district court trial, the plaintiffs provided “ample evidence” that such events have occurred on multiple occasions, and have included death threats, assaults, and profane rants against officers of and contributors to Americans for Prosperity, as well as threatened boycotts of its donors.

These incidents are more than enough to deter potential donors, who may fear repercussions on their businesses and private lives if their donations are publicly disclosed.

That is why the Supreme Court struck down the state of Alabama’s attempt in 1958 in NAACP v. Alabama to force the NAACP to provide the state government with the names of its members and supporters.

The court said it was “beyond debate that freedom to engage in association for the advancement of beliefs and ideas is an inseparable aspect of the ‘liberty’ assured by the due process clause of the 14th Amendment, which embraces freedom of speech.”

Furthermore, it was obvious that associations such as the NAACP would see “diminished financial support and membership” if they were compelled to publicize the names of their supporters and members.

But how great is the risk that these forms filed in California will be disclosed to the public? According to the district court, the attorney general “has systematically failed to maintain the confidentiality of Schedule B forms.”

Despite overruling the district court, even the 9th Circuit conceded that 1,800 Schedule B forms were publicly available owing to being “misclassified as public over several years.” In fact, the district court found that “while human error can sometimes be unavoidable, the amount of careless mistakes made by the Attorney General’s Registry is shocking.”

Unfortunately, all of this evidence was, in essence, dismissed by the 9th Circuit when it overturned the district court and held that the plaintiffs had not shown this public-disclosure requirement was a “significant First Amendment burden” that would “chill contributions.”

It concluded that the requirement survived “exacting scrutiny” because “it is substantially related to an important state interest in policing charitable fraud,” despite the evidence showing these forms were barely ever used by the investigative unit of the attorney general’s office.

The 9th Circuit actually said it would uphold the requirement even if it was true that “contributors would face substantial harassment” in direct contravention of the Supreme Court’s decision in NAACP v. Alabama, even as it claimed that the evidence of harassment and economic reprisal here did not rise to the level of that shown in the NAACP case.

The almost willful ignorance by the 9th Circuit panel of the underlying facts in this case and the danger this requirement poses to basic rights is shocking.

It makes one wonder if the outcome would have been different if the challenge had been brought by two liberal organizations before this same panel of judges, all of whom were appointed by Democratic Presidents Bill Clinton or Barack Obama, as opposed to two conservative organizations, including one heavily supported by the Koch brothers, the current bete noire of the progressive left.

What California is doing is not only unnecessary, it is a violation of fundamental First Amendment rights.

Would you donate to a nonprofit whose donors are reviewed by California’s attorney general, especially an extreme partisan such as Harris, now a Democratic senator from California, or current state Attorney General Xavier Becerra?

Would you donate to a nonprofit if your name could potentially be released to the public, making you subject to harassment, intimidation, and potential economic harm through your job or business?

This was a bad decision by the 9th Circuit that hopefully will be appealed and overturned.