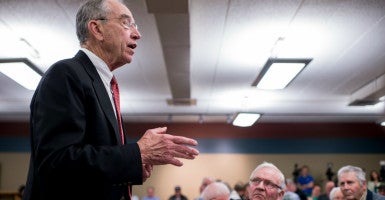 The mainstream media coverage said Sen. Chuck Grassley, R-Iowa, faced intense opposition back home for his stance of no hearings and no votes for a Supreme Court nominee, but a town hall video shows a different picture.

“We want to thank you for being courageous and holding that position because many people, elected officials, go to Washington and they don’t do what they said they were going to do,” Janae Stracke, born and raised in Iowa, told Grassley at a town hall event at Northwestern College, a small Christian school in Orange City, Iowa.

“You’re saying what you said you’re going to do, and you’re being effective and efficient with the time that you’re in the Senate to get other stuff done while this other situation is going on,” Stracke added.

Grassley, chairman of the Senate Judiciary Committee, which reviews judicial appointments, has stood firm that the Senate will not vote on any Supreme Court nominee to replace the late Justice Antonin Scalia, a conservative, until the next president takes office.

“We want to thank you for that position,” Stracke, who represents Concerned Women for America, told Grassley. Her remarks were followed by “the biggest applause of the day,” the Sioux City Journal reported.

According to Grassley’s press office, the senator spoke to Garland on the evening of April 4 and invited the judge to a breakfast on April 12, where they can “discuss the nomination and why the Senate will not consider a nominee until the next president takes office.”

Grassley spoke April 5 on the Senate floor on the public perception of the Supreme Court. He said, according to prepared remarks:

‘Simply Not the Case’

The week of March 27, Grassley held three town hall events in the mostly rural, strongly conservative northwest corner of Iowa, as part of his annual 99-county tour. He has visited every county across the state in each of the past 35 years.

Grassley held the town meetings—in Ocheyedan, Rock Rapids, and Orange City—while the Senate was in recess.

News reports from the events include headlines such as these: “In Iowa, Grassley takes flak for court stance” (The Des Moines Register), “Why won’t Grassley hold Supreme Court hearings? He fears Republicans more than Democrats” (The Washington Post), and “Supreme Court vise closes on Grassley” (Politico).

The Register reported that in Orange City, “Grassley faced support and opposition to his Supreme Court stance in roughly equal measure at the town hall.”

Concerned Women for America’s Stracke, in a letter to the editor in response to the newspaper’s coverage, said:

But that was simply not the case. I can’t speak for the support overall, but I was there at all three town halls this week, and the vast majority of people were supportive of Sen. Grassley.

At the town meeting in Rock Rapids, Grassley “was taking a beating from people who wanted to see him act to confirm Merrick Garland,” The Post reported.

A local chiropractor in Rock Rapids, Dr. Cody Hoefert, 38, told The Daily Signal another version of the town meeting, which he attended. He said that an “overwhelming majority” of the approximately 125 to 140 attendees appeared to support Grassley’s position.

“I got frustrated, because the headlines in the stories were ‘Grassley’s under pressure,’ and that was the opposite of the reality of what was on the ground in that room,” Hoefert said. “The headlines were very misleading and quite frankly disappointing.” He added:

The overwhelming majority of the people in the room, I would say nine to one, supported the senator and support his position when it comes to the Supreme Court. There were one or two local Democratic operative folks who were there who asked questions about whether or not it was in the best interest to not hold hearings, but the overwhelming majority of the room was supportive. There were two or three people from out of the county, that didn’t live in the county or even in the area, who had made their way up there and asked some questions trying to make it look as though the senator did not have the support that he had.

Another local Iowan, Scott Schneiderman, 48, told The Daily Signal that The Des Moines Register and the media in general “misportrayed the event.”

The Register’s story “was written as if the event in Rock Rapids was a 50-50 event,” he said. “It wasn’t even close[.] … [T]here were only four or five people there that were trying to convince Grassley not to go down his current path.”

The few local Democrats who came to the event were, for the most part, “respectful of the senator,”  he said.

Tammy Kobza, 55, who lives near Orange City, attended the Grassley town halls in Rock Rapids and Ocheyedan. She said both events were “very civilized.”

“I know for certain there were a lot of people that were there supportive of what the senator was doing. The natives were, anyway,” Kobza told The Daily Signal of the event in Ocheyedan. She added:

A lot of Iowans are very thankful that Senator Grassley is doing this. I think he has a lot of statewide support.

.@chuckgrassley will host Judge Garland for breakfast next Tuesday. #SCOTUS

“When they structured our nation, the founders placed trust in three separate but equal branches of government,” Grassley said in a formal statement March 16 after Obama nominated Garland. He added:

A majority of the Senate has decided to fulfill its constitutional role of advice and consent by withholding support for the nomination during a presidential election year, with millions of votes having been cast in highly charged contests. As Vice President Biden previously said, it’s a political cauldron to avoid. …

A lifetime appointment that could dramatically impact individual freedoms and change the direction of the court for at least a generation is too important to get bogged down in politics. The American people shouldn’t be denied a voice. Do we want a court that interprets the law, or do we want a court that acts as an unelected super legislature? This year is a tremendous opportunity for our country to have a sincere and honest debate about the role of the Supreme Court in our constitutional system of government.