Where the Fight Against ISIS Stands, and How the US Can Win 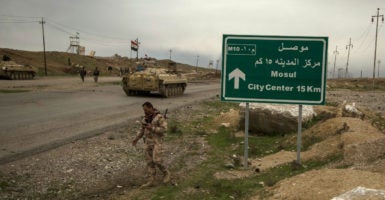 The Trump administration has invited 68 countries and international organizations to attend a summit in Washington on Wednesday to coordinate policies to defeat the Islamic State, also known as ISIS.

Secretary of State Rex Tillerson will lead the two-day gathering of foreign ministers in synchronizing coalition efforts to destroy ISIS on the battlefield, prevent it from staging a comeback, and deprive it of money, arms, and recruits.

The military campaign launched by the anti-ISIS coalition has made considerable progress in recent months. The ongoing offensives to push ISIS out of Mosul, Iraq’s second-largest city, and seize Raqqa, the de facto ISIS capital city in Syria, will be key topics at the summit.

The Iraqi army, in coordination with Iraqi Kurdish and Shiite militias, launched the offensive against Mosul in October, and has surrounded and retaken most of the city. They have been aided by a U.S.-led air campaign and supported by U.S. advisers, trainers, artillery batteries, and special operations forces.

Defeating ISIS in Syria is likely to be much more difficult than in Iraq because of the lack of reliable partners on the ground.

Syria’s brutal dictatorship has long been hostile to the United States. Backed by Russia and Iran, President Bashar al-Assad’s regime has focused its military attacks not on ISIS, but against more moderate rebel groups, including some supported by the United States.

Washington has been working with Syrian Kurdish militias, which have been effective military forces, but they are handicapped by the fact that they are feared and resented in the predominantly Arab areas that ISIS controls.

Moreover, Turkey considers them to be terrorists due to their affiliation with the Kurdistan Workers’ Party, a terrorist group that Turkey has been fighting on and off since 1984.

The Pentagon in recent weeks has deployed several hundred Army rangers and Marines to Syria to bolster Syrian rebel groups and provide artillery support to help them defeat ISIS. This is in addition to an estimated 500 American special operations personnel already in Syria.

Washington also should press its NATO allies and Arab coalition members to provide more military forces and support for the impending offensive against Raqqa.

The anti-ISIS summit also is an opportunity to develop a supportive international framework for transforming the military defeat of ISIS into a sustainable long-term political defeat.

The summit meeting should focus on how to restore law and order and enable self-government in areas of Syria liberated from ISIS. This means recruiting as many local Sunni Arabs as possible to root out ISIS and preclude it from resurging.

>>>U.S. Must Plan Now for the Day Mosul Is Liberated

Washington also should press coalition members to take more effective steps to choke off fundraising for ISIS, combat its internet recruitment efforts, and discredit its propaganda.

But as long as Syria’s ferocious civil war rages on, international efforts to ease the humanitarian catastrophe, stabilize the country, and permanently bury ISIS will remain precarious exercises.

Washington should lead international diplomatic efforts to pressure the Assad regime to accept a political settlement to end the conflict, including the full autonomy of regions that have expelled the regime’s repressive presence.

To nail the ISIS coffin shut, Washington must use the summit meeting to coordinate coalition efforts not only on the military front, but on the diplomatic, counterterrorism, humanitarian, and self-government fronts as well.