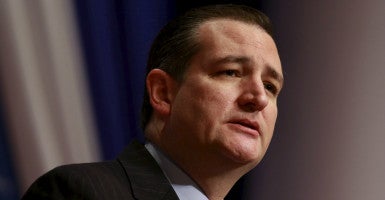 'Any time you hear people say scientists should not question the conventional wisdom, you are hearing someone advocating essentially for the abolition of science,' said Sen. Ted Cruz during a Space, Science and Competitiveness Subcommittee hearing. (Photo: Yuri Gripas/Reuters/Newscom)

Cruz used his opening remarks to detail the 2013 expedition where a ship of 74 people sent into Antarctica to research climate change got stuck in ice, forcing an airlift rescue a week later.

“This expedition was there to document how the ice was vanishing in the Antarctic, but the ship became stuck,” Cruz said before the Senate Commerce Subcommittee on Space, Science and Competitiveness. “It had run into an inconvenient truth, as Al Gore might put it.”

Cruz, who chairs the subcommittee, also noted Secretary of State John Kerry’s 2009 claim that the Arctic would be “ice-free” by the summer of 2013—which was the same year the researchers became trapped in ice.

Republicans on the committee said the hearing was intended to shed light on “opposing viewpoints in the field of climate science,” which Cruz said are “reflexively” brushed aside by policymakers.

He repeatedly pointed to satellite data that found no significant global warming during the past 18 years, a slowdown often referred to as the warming “pause.”

“Global warming alarmists don’t like these data. They are inconvenient to their narrative,” Cruz said. “But facts and evidence matter.”

Judith Curry, former chair of Georgia Institute of Technology’s School of Earth and Atmospheric Sciences, testified that while climate scientists uniformly agree that surface temperatures have increased during the past century, there is “considerable” disagreement about whether humans drive global warming and if warming is dangerous to the planet.

Curry’s research led her to findings that natural causes could be playing a larger role in warming than human activity, challenging what many consider “settled” conclusions in the climate debate.

But instead of leading to reignited deliberation, Curry said the science community quickly branded her a “heretic” for challenging the status quo.

“In their efforts to promote their ‘cause,’ the scientific establishment behind the global warming issue has been drawn into the trap of seriously understating the uncertainties associated with the climate problem,” she said, adding: “This behavior risks destroying science’s reputation for honesty and objectivity. Without this objectivity and honesty, scientists become regarded as merely another lobbyist group.”

Democrats denounced the four witnesses Republicans called to testify as climate change “deniers” in a press conference held prior to the hearing.

“This hearing doesn’t make a lot of sense, given the challenges we are facing,” said Sen. Gary Peters of Michigan, the top Democrat on the subcommittee. “When it comes to climate change, the science is pretty clear. It is basically settled.”

As reason to close debate on the issue, Democrats routinely float the statistic that 97 percent of scientists agree that human activity causes climate change. But those on the right have pushed back on the number, arguing it’s contrived from vague surveys.

“Any time you hear people say scientists should not question the conventional wisdom, you are hearing someone advocating essentially for the abolition of science,” Cruz said.

The hearing took place days before diplomats in Paris are expected to finalize an international climate pact as the United Nations summit comes to a close Friday.

U.S. diplomats have been working with representatives from nearly 200 other nations for the past week to broker an agreement aimed at cutting global carbon emissions.

“One professor is not going to negate peer-reviewed science.”