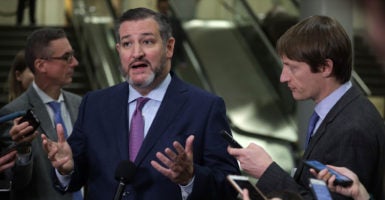 "Today, the Democrats are the party of Hollywood celebrities, Silicon Valley, and Wall Street tycoons, and they look down on the working class,” Sen. Ted Cruz, R-Texas, says at CPAC. Pictured: Cruz speaks to reporters Jan. 21 during a recess in President Donald Trump's impeachment trial in the Senate. (Photo: Alex Wong/Getty Images)

The divide between the values of the Democratic and Republican parties continues to widen, Sen. Ted Cruz, R-Texas, said Thursday during an annual gathering of conservative activists outside Washington.

Cruz said the Republican Party will continue to see success because of its focus on protecting blue-collar jobs and getting people off welfare and unemployment benefits.

“The Republican Party is the party of truck drivers and steel workers and oil workers and farmers and ranchers and firefighters and waiters and waitresses,” Cruz said. “And the Democratic Party says: ‘You silly little people, you deplorables, you don’t need a job.’”

Cruz and Daily Wire podcaster Michael Knowles were joined on the CPAC stage by Ronna McDaniel, chairwoman of the Republican National Committee, for a live episode of the pair’s hit podcast “Verdict With Ted Cruz.”

“I think that message connects a lot better with the American people than the message that there are 57 genders and we need to steal everybody’s property,” Knowles responded to Cruz’s remarks.

The conversation was an offshoot of the two men’s podcast, which covered President Donald Trump’s Senate impeachment trial.

“This podcast launched on the very first night of the impeachment trial,” Cruz said, describing its success. “Each night after the proceedings, I would jump in a truck and we would record at midnight or 2 in the morning. [The podcast] went from nonexistent to being the No. 1 podcast in the world.”

McDaniel, the RNC chairwoman, came out halfway through the segment to talk about the importance of remembering those who feel forgotten by most politicians.

She said she used this strategy successfully to swing Michigan to the Republican column during the 2016 presidential election, when she was chairwoman of the Michigan Republican Party.

“We saw these forgotten men and women [while campaigning] who really felt like Washington had left them behind,” McDaniel said. “They felt that the Democrats had become this redistributionist, coastal, elite party of the left that forgot about the middle of the country.”

Cruz said prosperity has risen significantly in such “forgotten” communities since Trump took office, as demonstrated by a town he said he visited last week in south Texas.