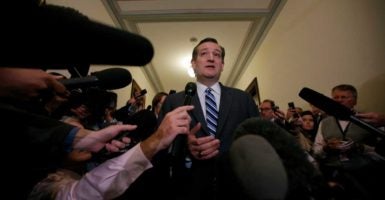 Sen. Ted Cruz, R-Texas, told reporters at a rally in Loveland, Colorado, that there is a “precedent” for an evenly divided, eight-member court.

“You know, I think there will be plenty of time for debate on that issue,” Cruz said when asked about Hillary Clinton’s Supreme Court nominees should she win the presidency.

Cruz pointed to the court’s history.

“There is certainly long historical precedent for a Supreme Court with fewer justices. I would note, just recently, that Justice [Stephen] Breyer observed that the vacancy is not impacting the ability of the court to do its job. That’s a debate that we are going to have,” Cruz said.

Cruz was referring to a comment Breyer made Monday in an interview with MSNBC in which he said, “The court, when it began at the time of the Constitution’s writing, had six members. They had six members for several years.”

If you want the judiciary determining public policy, of course you’d think that Supreme Court justices should “represent all of us.”
—@ishapiro

Cruz is not the first Senate Republican to raise the prospect of leaving the seat vacant.

“I promise you that we will be united against any Supreme Court nominee that Hillary Clinton, if she were president, would put up,” McCain said in a radio interview. “I promise you … ”

Garland, chief judge of the U.S. Court of Appeals for the D.C. Circuit, was nominated by Obama in March to fill the seat of Antonin Scalia, who died in February.

“Make no mistake: As a former law clerk … I don’t believe there would be a real substantive distinction, a real noticeable difference between the voting pattern of a justice who would be appointed by a President Hillary Clinton … and Merrick Garland,” Lee told reporters. “I just don’t think there is much, if any, difference.”

The idea of keeping the seat vacant is also drawing support from legal scholars as well.

Ilya Shapiro, a senior fellow in constitutional studies at the Cato Institute and editor of the Cato Supreme Court Review, argued in an op-ed for The Federalist that “it would be completely decent, honorable, and in keeping with the Senate’s constitutional duty to vote against essentially every judicial nominee [Clinton] names.”

Shapiro noted that the Constitution is “silent” on the matter of a vacant Supreme Court seat.

“Well, let’s get one thing out of the way first: the Constitution is completely silent on all this,” Shapiro wrote. “It’s the president’s job to nominate and the Senate’s to provide ‘advice and consent,’ but there’s no further textual explication.”