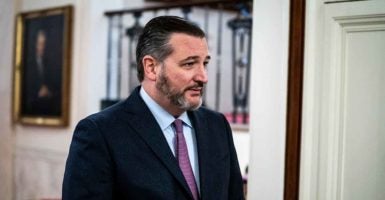 Sen. Ted Cruz, R-Texas, recently launched a wildly popular podcast called “Verdict With Ted Cruz” in which he teams with Michael Knowles, host of “The Michael Knowles Show” podcast on The Daily Wire. Michael joins me today to give some behind-the-scenes perspective on “Verdict,” which began as a conversation about President Donald Trump’s Senate impeachment trial.

We also discuss why socialism is antithetical to the American dream. And we share a conversation that our colleague Virginia Allen had with filmmaker James O’Keefe, founder of Project Veritas, on ABC News and media bias.

Michael Knowles: It’s so good to be back with you.

Del Guidice: Well, we’re glad to have you. So along with this show that you already host on Daily Wire, you’ve recently started a podcast with Sen. Ted Cruz called … “Verdict,” and you talk about impeachment and the whole impeachment push.

Can you tell us about how this came about? Obviously, it was impeachment, but how [did this come] about with you and Sen. Cruz?

Knowles: It was so fun because we had talked about doing a show with Sen. Cruz. We had talked about [it] in passing over dinner or things like that. Then impeachment happens. And the senator calls us and says, “We’re doing this show. Let’s fly out to D.C. We’re going to start this in two days.”

So we fly out, put a whole set together, put a whole crew together, do the show, and we think, “Look, it’ll be cool, historic, informative. I don’t know how many people are going to listen to it, but … ” because it would be so in the weeds about this government process.

No one was even watching impeachment, so much less a show about impeachment.

And then, to our great surprise, the thing takes off and it hits No. 1 on the charts within, I think, it was four days. And then it was there for two weeks or so.

People were really hungry for it. And what I think the reason for that is, is that people are a lot smarter than they get credit for.

So the senator would come straight from the Capitol every night at 1 or 2 in the morning. We would sit in this random basement studio, and I think part of it was because we were so exhausted, we would have a really honest conversation. The senator would pull the curtain back a little bit on what was going on.

So we’re so pleased. I think it’s at about 4.5 million downloads now on just the first 10 or 12 episodes. And we’ve been keeping the show going. We filmed three, actually, since I’ve been in D.C. for the last 24 hours. And it’s been a blast. And we just did a live one here at CPAC [the Conservative Political Action Conference].

Del Guidice: That’s incredible. I didn’t realize you were recording so late at night after the hearings ended. What was that like to be able to discuss all of that as it was happening, right afterward? … It’s just a really cool environment to be able to do that in.

Knowles: It was one of a kind. It was a historic moment because, first of all, the senator’s got an engine like I’ve never seen. The guy does not sleep. And so he comes, he’s rearing to go.

So we would talk about what’s happening in the cloak room, how he’s pulling this senator aside because [Rep.] Adam Schiff made this stupid comment, and that gives the Republicans an opening.

Del Guidice: Sen. Cruz was at The Heritage Foundation a couple of months ago discussing this. He had mentioned how Democrats now, and you sort of alluded to this, are using impeachment now as a political weapon … And he said, “We won’t be surprised if, again, there’s a Republican president in a Democrat House that doesn’t appreciate what he’s doing or just politically doesn’t agree with it, that they’re going to go this route again.”

Did you all talk about that? And what is your perspective on that as well?

Knowles: Yeah. The Founding Fathers were very nervous about this. They feared that impeachment could be used in this way.

That’s why, as part of the big debate over the impeachment provision of the Constitution, there was an open question, should presidents be able to be impeached for maladministration, for just not doing a good job, because the Congress doesn’t like the cut of their jib?

And this was shot down. It was not in fact the case. Actually, to be impeached, you had to commit treason, or bribery, or other high crimes and misdemeanors. And the Democratic House completely threw [that] out the window.

It was not only historic because it was the third impeachment in American history. It was the first totally partisan impeachment. There was no Republican who voted to impeach.

Later on, [Sen.] Mitt Romney got a little angry at the president, so he voted to convict. He was the only Republican to do that. But on the vote to impeach, it was purely partisan.

The trouble is, if you just have partisan impeachments in the future, then the executive becomes subservient to the House. The president, more or less, will just serve at the pleasure of the Congress. And then you get a Congress from the other party and they automatically impeach him.

I mean, that is a recipe for chaos. The Founders were deeply terrified of that. And the left seems to be pushing us ever closer to that very awful outcome.

Del Guidice: So, “Verdict,” you all take mailbag questions from your audience. What kinds of things were you hearing and what kinds of questions were you getting during this process?

Knowles: The questions were so sophisticated. But this is my main takeaway … when I say a big takeaway from the success is the people are smarter than they get credit for. You see it in the mailbag too.

Very often when you hear sound-bitey interviews about impeachment, it’s all just top-of-the-line, juicy, political, who doesn’t like whom, and that kind of thing.

These were very technical questions by people who were really, really tuned in and all too often don’t get their voices heard.

So we love looking at the podcast as a conversation. Obviously, it’s an intimate, close, late-night conversation between me and the senator, but it’s also conversation with the audience. And hearing from them is my favorite part of the show.

Del Guidice: That’s pretty incredible. And it’s great that they have a voice there.

So you’re here at CPAC, you’re speaking. And the theme this year is socialism versus the American dream. Why are you so passionate about this?

Knowles: Socialism is a wicked evil ideology. And, unfortunately, conservatives don’t use that kind of clear language too much.

The argument against socialism all too often is, “Oh, it just doesn’t work that well. Oh, it’s not the most efficient way to allocate resources. Oh, it’s going to reduce the size of the economy.” Who cares? Nobody is motivated to go vote because of arguments from efficiency.

I speak as a Catholic. The Catholic Church condemned socialism. It said you cannot be a socialist and a Christian. They called it a wicked confederacy, pests, a plague that steals the gospel itself. That was popes who talked about this.

I think American conservatives, of all religious backgrounds, need to take on that kind of language. Because look, if we have a Democratic president and my net worth decreases by 5% and I got to pay more taxes, yeah, that’s awful. I don’t want to do that. But who cares?

The real trouble is, they are robbing us of human dignity. That system is so inhuman that it has to be opposed. And if there’s anything we can all agree on in America, it ought to be to reject that vile ideology.

Del Guidice: That is an incredibly strong answer. I appreciate it, Michael. Thank you so much for being with us on The Daily Signal Podcast.

Knowles: Always great to talk to you. Thank you.