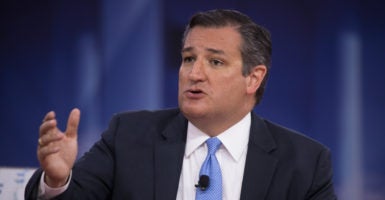 “It is past time that the United States took swift action to sanction those who systematically undermine democratic order and human rights and to demonstrate our commitment to the Nicaraguan people,” Sen. Ted Cruz, R-Texas, said. (Photo: Jeff Malet Photography/Newscom)

Sen. Ted Cruz says a bill he introduced with colleagues will help put the corrupt government of Nicaragua on notice and give aid to the Nicaraguan citizens participating in protests around the country.

“This bipartisan legislation directs U.S. officials to oppose international loans to the government of Nicaragua until the Ortega regime is held accountable for its oppressive, anti-democratic actions and the secretary of state certifies that Nicaragua is taking effective steps to hold free and fair elections,” Cruz, R-Texas, said Wednesday, speaking about the Nicaraguan Investment Conditional Act.

Since April 18, Nicaragua has seen the most massive protests in decades to resist its authoritarian government led by former communist revolutionary Daniel Ortega and Rosario Murillo, his vice president who is also his wife.

The protests of the government have resulted in dozens of deaths, BBC reported.

“We are paying for this communist oppression,” Cruz said. “Any such money should be directly tied to basic democratic reforms. Otherwise these loans are just benevolent charity for a dictator, and not just any dictator.”

“We are taking the American taxpayer dollars and giving them to an anti-American dictator, who oppresses his own people and seeks to undermine the national security interest of our own country,” he added.

Nicaragua receives money from international financial institutions such as the World Bank, International Monetary Fund, and and the Inter-American Development Bank, and the U.S. has been the largest contributor to these organizations.

According to a recent commentary from Ana Quintana, a policy analyst for Latin America at The Heritage Foundation, Ortega is set on ending Nicaragua’s democracy.

He has sporadically ruled Nicaragua since 1979 and lawfully won his election in 2006, “but since then has manufactured ‘wins’ in each election cycle.”

The Texas senator said the bill, currently in the Senate Foreign Relations Committee, would counter Ortega’s regime by promoting democracy.

“What this bill does is to prioritize loans for the promotion of democracy and basic human needs,” Cruz said. “In order to gain U.S. approval, they would need to show marked improvement in human rights, hold free and fair elections and strengthen the rule of law, and protect the right of political opposition parties, journalists, and human rights defenders.”

Cruz said the country has no choice but to act to address the situation in Nicaragua.

“It is past time that the United States took swift action to sanction those who systematically undermine democratic order and human rights and to demonstrate our commitment to the Nicaraguan people,” Cruz said.

In an interview with The Daily Signal, Quintana said the U.S. should remember the lesson of Venezuela, which is seeing a severe economic crisis, prompting at least 1 million people to enter Colombia from Venezuela since last year as a result of its socialist government.

“Hugo Chavez was democratically elected and Hugo Chavez little by little started chipping away at the institutions of Venezuela and everybody stayed quiet because they didn’t think it could get as bad,” Quintana said. “Now look at the situation Venezuela is in 20 years later, they are in a place where it took Cuba over 50 years to get to, Venezuela is there in about 20 years.”