Nicaragua’s Regime Wants to Go the Direction of Venezuela. Here’s How That Can Be Avoided. 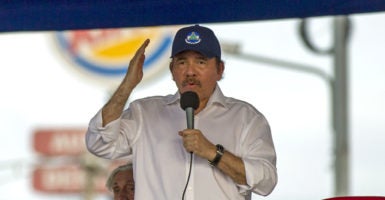 Since April 18, the largest protests in decades have engulfed many parts of the small Central American country of Nicaragua.

Hundreds of thousands of demonstrators have taken to the streets to demonstrate against their authoritarian government led by former communist revolutionary Daniel Ortega and his handpicked vice president and wife, Rosario Murillo.

>>> RSVP here to attend “Nicaragua at an Inflection Point,” a Heritage Foundation event featuring Sen. Ted Cruz, R-Texas, at 3 p.m. on May 9.

Initially, demonstrators took to the streets to protest an unpopular social security reform. But the government’s brutal repression of the protesters—many of them university students—has spawned a backlash against Ortega’s socialist Sandinista National Liberation Front (FSLN).

Nicaraguan police and pro-government thugs have killed dozens of protesters. Hundreds have also been injured or disappeared. The government has censored independent media channels by  taking them off the air. Reporters and human rights organizations report that live ammunition is being used on protesters, and the military is being deployed in certain parts of the country.

It is clear that Ortega intends on taking Nicaragua’s democracy down the same dark path as Venezuela.

Since 1979, Ortega has ruled Nicaragua on and off. He legitimately won his election in 2006, but since then has manufactured “wins” in each election cycle.

In 2008, Ortega eliminated two opposition party candidates from the ballot and prohibited international observers from evaluating the election. Following that, he changed the constitution to eradicate presidential term limits, even though the constitution states that only the National Assembly could make such a decision.

The 2011 Nicaraguan presidential election saw yet another “victory” for the leftist leader in which international electoral observers, again, declared electoral “irregularities.”

After manipulating the outcomes of previous elections, Ortega took it a step further in 2016 and appointed his wife as his vice president, despite the Nicaraguan Constitution strictly forbidding it. He also ordered the removal of 27 opposition members of the National Assembly and forced the Supreme Court, a body largely controlled by his ruling party, to disqualify the opposition candidate.

The State Department’s Country Reports on Human Rights Practices for 2014 for Nicaragua listed multiple abuses by the government:

Nicaragua is at an inflection point. The continued demonstrations show that Ortega’s autocratic regime is unsustainable. Protesters and the government have agreed to a dialogue brokered by the Catholic Church in efforts to diffuse the crisis, but the government’s continued violence reduces the likelihood of a peaceful resolution.

The U.S and regional partners should insist on facilitating the dialogue as well. This would provide guarantees to all parties involved that justice would be impartial. Brokers of the talks should also urge the Nicaraguan government to allow the Organization of American States’ Inter-American Commission on Human Rights to investigate the murder of protesters. The U.S. and like-minded countries must find a responsible solution to this crisis.