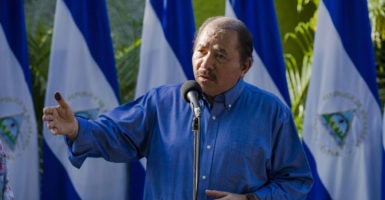 Lauren Hand is a member of the Young Leaders Program at The Heritage Foundation.

The ruling leftist National Liberation Sandinista Front won 135 of the seats, leaving only 18 seats under opposition control. This puts the leftists in control of the presidency, the national assembly, the judiciary, and local-level government offices.

While international electoral observers have found weaknesses in the small Central American country’s electoral system, they do not believe that decisive fraud occurred in this month’s elections.

Tensions came to a head when an indigenous opposition party, the Yatama, challenged the election results. In the coastal city of Bilwi, opposition protesters began looting outlets and burning two farms and forest ministry workplaces, according to Gen. Francisco Diaz, a senior state police official.

There have also been post-election riots in 13 different municipalities in the country, but the worst of the violence took place in Bilwi. The government of Nicaragua deployed special police, which put down the riots with the use of tear gas.

As a result of police clashing with protesters, seven protesters died, 70 were injured, and nine houses and two government buildings were damaged by fire.

It is clear that President Daniel Ortega intends to take Nicaragua’s democracy down the same dire path as Venezuela. Ortega legitimately won his election in 2006, but since then, has manufactured “wins” in each election cycle.

In 2008, Ortega eliminated two opposition party candidates from the ballot and prohibited international observers from evaluating the election. In 2009, he changed the constitution to eradicate presidential term limits, even though the constitution states that only the National Assembly could make such a decision.

The 2011 Nicaraguan presidential election saw yet another “victory” for the leftist leader in which international electoral observers, again, declared electoral “irregularities.”

Ahead of his 2016 re-election, Ortega took it a step further and appointed his wife as his vice president, even though Article 147 of the Nicaraguan Constitution strictly forbids it.

In June 2016, Ortega demanded the removal of 27 opposition members of the National Assembly. Ortega forced the Supreme Court to disqualify Eduardo Montealegre, an opposition candidate, from the municipal contest altogether.

This constant manipulation of the electoral process sparked an Organization of American States oversight mission.

Understandably, the crisis in Venezuela has dominated the media’s attention toward much of Latin America. But U.S. policymakers have recognized something needs to be done in Nicaragua.

In 2016, the House passed the Nicaraguan Investment Conditionality Act (NICA) and Sen. Ted Cruz, R-Texas, introduced the bill in the Senate.

The bill stipulates that the U.S. government will not support loans for Nicaragua from international financial institutions unless the country holds “free, fair, and transparent elections,” ceases abusing human rights, and provides fiscal transparency. These sorts of policies could help confront Ortega’s authoritarianism.

Even though Congress has proposed legislation like NICA and others, there is still much to be done. The State Department released a statement on Nov. 8 in which they “condemn the post-electoral violence, lament the loss of life, and call for an investigation that brings those responsible to justice and are seriously troubled by irregularities throughout this electoral process.”

It is in America’s interest to preserve true democratic freedom in Latin America. The U.S. has an obligation to take the lead in our own hemisphere and fight for fair elections in Nicaragua.