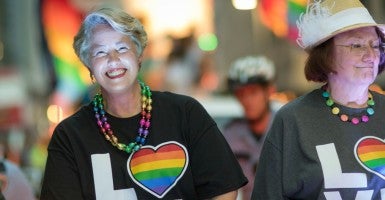 On Tuesday, the people of Houston will head to the polls to vote on a controversial measure that would create legal protections related to sexual orientation and gender identity, among other categories.

The so-dubbed “bathroom bill” has gained national attention, pitting Houston at the center of the latest battle between LGBT and religious liberty advocates.

But residents aren’t the only ones having a say in the debate. According to groups supporting the measure, a number of big businesses have gotten behind the ballot initiative, urging voters to say “yes.” Seven of the biggest include:

“Apple is proud to be a part of Houston with four stores that employ over 500 people,” the company, according to the Human Rights Campaign, said in a statement.

Our stores and our company are open to everyone, regardless of where they come from, what they look like, how they worship or who they love. Apple supports Proposition 1 as it sends a clear message that Houston is focused on a future of inclusion, diversity and continued prosperity.

The measure, called the Houston Equal Rights Ordinance (HERO), applies to city employment and city services, city contracts, public accommodations, private employment, and housing. Residents could be fined up to $5,000 for violating the measure.

Critics worry that HERO could hinder people’s ability to live in accordance with their religious and moral beliefs about marriage and sexuality, pointing to cases like the Oregon bakers who were ordered to pay $135,000 for refusing to make a cake for a same-sex wedding as an example.

“Once again big business wants its freedom to operate according to its values, but wants to deny that freedom to others,” said Ryan T. Anderson, a senior research fellow at The Heritage Foundation and author of the new book “Truth Overruled.” Anderson adds:

In Houston they are advocating for the kind of policy that has elsewhere penalized family businesses of bakers, florists and photographers, as well as faith-based adoption agencies. This is cultural cronyism at its worst.

They say this measure goes even farther than other sexual orientation and gender identity laws that have been implemented throughout the country, and they fear that the inclusion of sexual identity could allow men who identify as women to use women’s bathrooms, locker rooms, and other sex-specific facilities, without having legally changed their name or undergone surgery or hormone treatment.

>>> Commentary: What Makes This Houston Ballot Measure So Threatening

But businesses who support HERO believe that the policy is good for the Houston economy and will help create jobs.

“We are executives who lead and represent business interests in Houston and support Proposition 1, the Houston Equal Rights Ordinance (HERO) on the November ballot,” reads an ad signed by executives at JP Morgan Chase, United Health Care, Citi, HSBC Bank, among others. “We are committed to Houston’s long-term success and believe that Proposition 1 will be good for business and great for Houston. We urge you to vote YES on Proposition 1.”

The Houston City Council approved the ordinance last year by an 11-6 vote, and on May 28, 2014, Mayor Annise Parker, the city’s first openly gay mayor, signed it into law.

In response, a coalition of local pastors and conservative activists petitioned to force the city to bring the measure to the public for a vote. They obtained 55,000 signatures, which was well beyond the 17,269 required for a referendum.

But the city claimed that only 15,000 were valid and refused to place the issue on the ballot. In August 2014, some of the petition’s supporters filed a lawsuit to force Parker to allow citizens to vote on the measure.

Then, in a move that caught national attention, Parker subpoenaed the pastors’ communications, including their sermons, accusing them of illegal electioneering. Many thought it was an attempt to intimidate those who stand against HERO.

Parker eventually withdrew the subpoenas, and this summer, the Texas Supreme Court ruled that the city council must either repeal the equal rights initiative or let the voters decide on it.

On Tuesday, the dispute will finally be settled.

Currently, 17 states and more than 225 cities across the country have measures banning discrimination in housing, employment, and public accommodations based on sexual orientation and gender identity, according to the American Civil Liberties Union. Texas is not one of them.

The Daily Signal compiled this research with the help of 2nd Vote, a conservative website and app that tracks the flow of money from consumers to political causes.