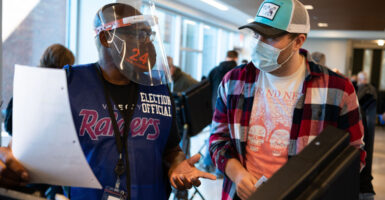 The Supreme Court advises that judges should not change state and county election rules right before an election, a Cincinnati-based appeals court has reminded a lower court.

The Ohio case, like others this election season, involves the use of ballot “drop boxes” and restrictions that officials may put on them while attempting to maintain the integrity of state elections.

In a split decision, 6th U.S. Circuit Court of Appeals Judge Richard Griffin, writing for himself and Judge Amul Thapar, said: “The Supreme Court has repeatedly emphasized that lower federal courts should ordinarily not alter election rules on the eve of an election.”

Why did District Court Judge Dan Polster, a Clinton appointee, need the Oct. 9 reminder from the 6th Circuit panel?

Because, as Griffin put it, “Here, the district court went a step further and altered election rules during an election.”

Ohio Secretary of State Frank LaRose issued a directive that allowed ballot drop boxes to be placed only in a county’s election office in secured, monitored settings.

LaRose reasoned that under Ohio law, an absentee ballot could be returned only by mail or by “personally deliver[ing] it to the [election] director.”

In LaRose’s view, this last requirement meant that any drop box had to be located at a county’s election board office.

Polster disagreed, issuing what some called a “scathing decision” that required LaRose to allow drop boxes at additional locations. In the process, the district court judge summarily rebuffed concerns about election fraud, saying that LaRose “has not advanced any legitimate reason to prohibit a county board of elections from utilizing off-site drop boxes and/or off-site delivery of ballots to staff.”

Polster also refused to stay his decision—put it on hold—to allow Ohio officials to appeal.

That’s when Griffin and Thapar, the 6th Circuit judges, stepped in to stay Polster’s decision themselves, dissolving his preliminary injunction and reminding their fellow judge of his proper role.

“Federal courts are not ‘overseers and micromangers’ of ‘the minutiae of state election processes,’” they wrote, and “The district court in this case altered election rules during an election and in disregard for Ohio’s important state interests.”

Ohio is generous with its absentee voting rules even though “there is no constitutional right to an absentee ballot,” the judges said, adding:

Griffin and Thapar said that even if subjected to some form of heightened scrutiny, Ohio’s restrictions on drop boxes “easily pass constitutional muster.”

Moreover, contrary to Polster’s claim, the Ohio secretary of state had advanced legitimate concerns that supported his directive, the 6th Circuit judges said.

First, the directive “promotes uniformity,” which has been “consistently” recognized as a legitimate state interest in running “orderly” elections.

Second, the directive “promotes the state’s efficiency interests in administering elections,” given the long list of complex responsibilities of elections officials. That “efficiency interest is particularly important where, as here, voting is already in progress,” the judges wrote.

Third, “limiting drop boxes to one location per county promotes the accuracy of the election” since “voters who return a ballot to the wrong drop box run the risk of having their ballot rejected.”

And finally, the secretary of state’s directive “promotes the security of the election,” the two judges said. Ohio “never before used off-site drop boxes” and requiring them at the last moment would “require on-the-fly implementation of new, untested security measures.”

The danger of allowing unmonitored, unsecured drop boxes for absentee ballots was demonstrated recently in Virginia. There, the state board of elections issued a warning to voters Oct. 5 that six outdoor mail collection boxes had been broken into during the prior weekend, mailboxes that may have contained absentee ballots.

Judge Helene White, the third judge on the 6th Circuit panel, wrote a dissenting opinion disagreeing with Griffith and Thapar.

White said she would have upheld the lower court’s injunction because she believed that the decision on how many ballot drop boxes should be placed, and where, should be left up to county boards of election. White seemed unconcerned that this could lead to inconsistent rules throughout the state.

But as Griffith and Thapar pointed out, “the district judge in this case altered election rules during an election and in disregard for Ohio’s important state interests.”

Griffin and Thapar are right. Federal judges shouldn’t alter the rules at the 12th hour—especially after an election has begun.