Sen. Ted Cruz’s Advice to Politicians: ‘Get Back to Listening to Main Street’ 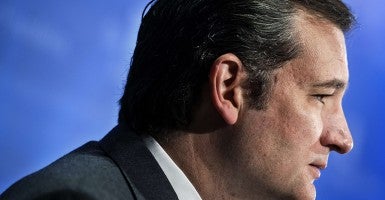 Sen. Ted Cruz, R-Texas, today warned Republicans and Democrats alike that they need to “get back to listening to Main Street,” not Wall Street, to avert more electoral losses like that suffered this week by House Majority Leader Eric Cantor.

Cruz, a tea party favorite,  spoke to reporters after making remarks at a rally in front of the White House in support of Meriam Ibrahim Ishag, the young mother and physician who is being persecuted for her Christian faith in her native Sudan.

Political strategists attribute Cantor’s loss at least in part to his support for giving legal status to a significant percentage of illegal immigrants, as well as his close ties to corporate interests that benefit from relationships with Washington politicians.

Cruz, however, asserted that Brat’s 12-point margin of victory had little to do with Cantor’s support for immigration reform. Instead, he said, it was the result of voters in the Richmond-area district wanting to be heard in Washington.

“I think the lesson that every member should take, Republican or Democrat, is that every one of us needs to listen to the people,” Cruz said. “We need to respond to the real challenges facing this country.”

The Texas conservative went on to encourage fellow lawmakers to focus on the concerns of “the men and women back home.” He alluded to the “all politics is local” maxim of a late lion of the Democratic Party, House Speaker Tip O’Neill of Massachusetts: