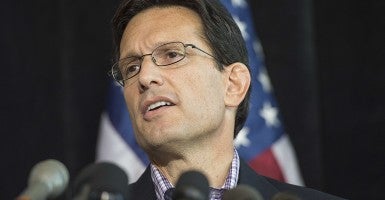 Majority Leader Eric Cantor, the No. 2 Republican in the House of Representatives, lost his primary election race Tuesday to a local economics professor in Virginia’s 7th District.

Dave Brat defeated Cantor by 56 percent of the vote to 44 percent, with nearly all precincts of the Richmond-area district reporting.

In a concession speech shortly after 9 p.m., Cantor told supporters:

It’s disappointing, sure, but I believe in this country, I believe there is opportunity around the next corner for all of us. So I look forward to continuing to fight with all of you for the things that we believe in, for the conservative cause, because those solutions of ours are the answer to the problems that so many people are facing today.

In a late-night interview with Fox News Channel’s Sean Hannity, Brat called his victory “a miracle,” credited tea party activists for their support, and said he ran on “Republican principles” such as limited government and free markets.

Brat, 49, made Cantor’s stance on immigration the centerpiece of his campaign. In a column for the Richmond Times-Dispatch, Brat wrote:

[T]he central policy issue in this race has become Cantor’s absolute determination to pass an amnesty bill. Cantor is the No. 1 cheerleader in Congress for amnesty. This is not the Republican way to fix our economy and labor markets.

Cantor, 51, was first elected to Congress in 2000 and has been majority leader since 2011. According to Roll Call, Cantor raised $5.44 million, while Brat raised $207,000. Cantor’s defeat marks the first time ever that a House majority leader lost in a primary.

In other election news Tuesday night, Sens. Lindsey Graham and Tim Scott won their primaries in South Carolina. Graham, a supporter of the Gang of 8 immigration bill, defeated six challengers and finished with 57 percent of the vote.