Surge of Illegal Minors Over Border Dulls Appetite for ‘Reform’ 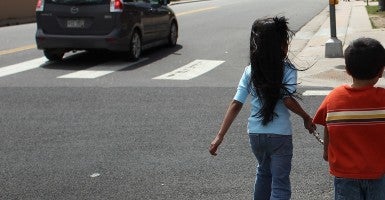 Conservative lawmakers today blamed President Obama’s policies for provoking a wave of unaccompanied immigrant children to cross the southern border into the United States. The humanitarian crisis, they said, would deter the House from pursuing “comprehensive” immigration reform similar to what the Senate passed last year.

“He picks and chooses what he wants to enforce, regardless of what we pass or don’t pass,” Salmon said of Obama. “That hardly is an incentive to want to sit down at the table and negotiate a deal on immigration reform.”

>>> Related: Obama Should End Underlying Policies Behind the Crisis

Specifically, Salmon and Labrador say the Deferred Action for Childhood Arrivals program—which the Obama administration extended for another two years earlier this month—suggested that illegal immigrants may be granted amnesty if they make it across the Mexico/U.S. border.

By his executive action without involving Congress, Obama promised temporarily not to deport certain undocumented immigrants ages 16 to 31—the so-called “Dreamers”—who were brought here illegally by their parents.

“This [issue] with the unaccompanied minors so badly hurts his push [to legalize unlawful residents],” Salmon said. “In my mind, he is only hurting his cause.”

As Homeland Security and Border Patrol facilities in Texas have been overrun by women and children crossing the border from Central America and Mexico, immigration officials have dropped off unaccompanied boys and girls by the busload in Phoenix. At the bus stops, immigrants are instructed to report to the local Immigration and Customs Enforcement office within 15 days and are then sent to various places for holding.

The Department of Health and Human Services predicted in March that at least 60,000 minors would try to cross into the United States without their parents this fiscal year.

House leaders have insisted that they will consider border security, visa reform and other individual aspects of the immigration system for legislative changes, rather than what they say was the Senate’s amnesty-based approach to the estimated 11 million already here in violation of the law.  Labrador, once part of a bipartisan group of House members pursuing “comprehensive”  reform, said he still supports action but in a different form.

“I am for immigration reform; it’s the right thing to do,” Labrador said. “But reform does not mean what some think it does—granting amnesty to people. You see the result of what that policy would be—encouraging illegal activity. We have to fix the current system so we bring people here legally and discourage people from coming illegally.”

Taking care of those crossing illegally, such as the women and children held in Arizona, lawmakers suggested, should fall to their native countries. Asked how he would handle the recent surge, Labrador gave a pointed response.

“You send them home and encourage them to stay home,” Labrador said. “Right now the message by the administration is we pay for attorneys to represent them and we house them in the U.S. Guess what? You will get more people coming to the U.S illegally. If we go to their governments and say, ‘You have to stop encouraging this and you will pay for it,’ then we can have a rational immigration policy.”

The Senate Appropriations Committee reached a deal today to provide $1.94 billion in funding to cope with the surge in migrant children. That cost is the result of  the administration’s  not enforcing laws and securing  borders, the House members said.

“If we can stop the inflow of illegal immigration, there would be greater incentive for Congress to act on immigration reform,” Labrador said. “This is absolutely shameful.”