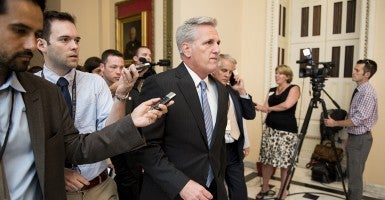 Defeat at the polls for House Majority Leader Eric Cantor sent shock waves through the House of Representatives. The Virginia Republican’s primary loss also left GOP lawmakers scrambling to solidify candidates to fill his leadership seat. As of tonight, Majority Whip Kevin McCarthy appeared to be closing in on the prize.

>>> Update: Labrador Takes on McCarthy for House’s No. 2 Post

Having lost his 7th District primary race to challenger Dave Brat, a Randolph-Macon College economics professor, Cantor  yesterday said he would resign as the House’s No.  2 Republican, effective July 31. House Speaker John Boehner, R-Ohio, announced that an election among Republican lawmakers to fill the vacant spot will be held June 19. The GOP caucus will gather and vote by secret ballot.

McCarthy, the House majority whip, yesterday announced he would run for  majority leader. Multiple reports suggest the No. 3 Republican has been whipping votes to secure the No. 2 position. Regardless of whether McCarthy wins, the whip seat will be vacant. By announcing his intent, McCarthy gives up his current position in leadership.

Sessions, chairman of the Rules Committee, became the second confirmed candidate seeking Cantor’s leadership slot. According to multiple reports, members of the Texas delegation had begun rallying around Sessions. He faced a battle, though, as McCarthy is used to wrangling votes.

Tonight, Sessions abruptly pulled out of contention with this statement, Politico reported:

After thoughtful consideration and discussion with my colleagues, I have made the decision to not continue my run for House majority leader. Today, it became obvious to me that the measures necessary to run a successful campaign would have created unnecessary and painful division within our party. At this critical time, we must remain unified as a Republican conference. As always, I stand ready and willing to work with our team to advance the conservative agenda that the American people demand and deserve.

Both Labrador and Jordan, sources say, would represent House conservatives in the leadership race. Though neither man has thrown his hat in the ring, each is said to be exploring runs as fellow conservatives approach them. “He’s getting a lot of encouragement from other members,” a source familiar with Labrador’s thinking told The Daily Signal.

Hensarling, also a conservative and chairman of the Financial Services Committee, released a statement yesterday saying he would explore a leadership bid, which energized conservative colleagues. Today, however, Hensarling quickly ended his exploration and ruled out a run. In a prepared statement, he said:

Although I am humbled by the calls, emails, and conversations from my colleagues encouraging me to return to leadership for the remainder of the 113th Congress, I will not be a candidate for majority leader next week. After prayerful reflection, I have come to the conclusion that this is not the right office at the right time for me and my family.

McMorris Rodgers, currently the House’s No. 4 Republican, fielded questions about seeking Cantor’s post. Though she received some support,  she decided against it. “After much encouragement from my colleagues, conversations with my family and many prayers, I have decided to remain Conference Committee chair at this time,” McMorris Rodgers said in a statement.

Scalise, chairman of the Republican Study Committee, fielded phone calls Tuesday night from colleagues urging him to run to replace McCarthy as whip, The Shreveport Times reported. Scalise yesterday announced he would do so.

With 180 members, the RSC aims to advance conservative policy ideas and legislation in the House. Regardless of whether Scalise wins or loses, the RSC will select a new leader in January, as chairmen serve two-year terms. Rep. Mick Mulvaney, R-S.C., is considered a potential successor to Scalise.

Stutzman, a conservative, announced today that he will run for whip.