5 Ways To Improve Our Primary Debates 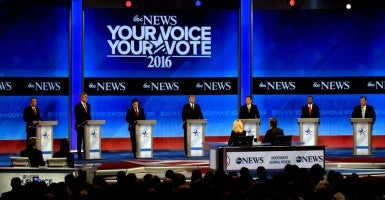 It is unrealistic to expect media anchors in pursuit of the highest possible ratings (and ad rates) not to ask the most provocative questions possible. (Photo: Matthew Healy/UPI/Newscom)

The fundamental problem with the 2016 primary “debates” among presidential candidates (especially Republicans) is that they are not debates—they are news conferences sanctioned by the Republican National Committee or the Democratic National Committee. As long as the TV and cable networks and other news organizations are in charge, we are going to have “gotcha” questions, arbitrary time limits, and quiz show gimmicks like a buzzer signaling a potential commander in chief to shut up.

It is impossible to discuss intelligently a critical issue like immigration, Obamacare, or Syria in 90 seconds.

It is impossible to discuss intelligently a critical issue like immigration, Obamacare, or Syria in 90 seconds. The candidate is obliged to offer short takes from his stump speech—“let’s get America going again” —and similar platitudes.

It is impossible to gauge the mettle of a candidate if he is forbidden to diverge from a question or to ask another candidate a question. Ideas cannot be fleshed out “à la Tweet” in 140 characters. The stronger argument does not emerge when the moderator determines what shall be discussed. From an Aristotelian perspective, pathos (emotion) inevitably prevails over logos (logic) and ethos (credibility).

It is unrealistic to expect media anchors in pursuit of the highest possible ratings (and ad rates) not to ask the most provocative questions possible. That is what they are paid and trained to do.

The solution lies in a recasting of the primary debates along the following lines:

1. Sponsorship of the debates, not by so-called news organizations, but by nonpartisan citizens’ groups like the League of Women Voters, which hosted the presidential debates in 1976, 1980, and 1984, and respected think tanks like The Heritage Foundation, the American Enterprise Institute, and the Brookings Institution. In 2012, Heritage and AEI co-hosted a Republican primary debate on foreign policy (along with CNN) that received high marks for its thoughtful questions and similarly thoughtful answers. The present primary debates are authorized by the national committees of the two major political parties, which also control the “nonpartisan” Commission on Presidential Debates.

2. Opening statements of five minutes by each candidate. If that sounds long, consider that in the first ever presidential debate between John F. Kennedy and Richard Nixon in 1960, each man delivered an opening statement of eight minutes. They talked for a total of 16 minutes without a break or a question from the moderator. Many debates now do not have opening statements, or those statements are extremely brief.

3. Free and open debate between the candidates on any question without interference by the moderator. This was the format of the Reagan-Bush primary debate in April 1980. The two men were allowed to engage in a free exchange of ideas that made their disparate positions crystal-clear. Also, there should be only one moderator who has the authority to cut off an exchange if it went on too long. The use of an “honor” system governing the use of time rather than buzzers and blinking lights will encourage civility and reveal the character of the candidates.

4. Extension of the debate from two to three hours, allowing each candidate the necessary time to present his case and rebut the arguments of his opponents. And the number of participants should be no more than five or a similar number.

5. Limit the number of primary debates to four—one on economic issues, one on foreign policy, one on social issues, and a final free-for-all debate. The only reason why we have so many debates now is that they win large audiences for the media sponsors. But under the law of diminishing returns, the latter debates produce precious little information about the qualifications of the candidates.

If this is one of the most important elections of our lifetime, and most Americans agree that it is, and if we want to nominate the best possible candidate, which we want to do, and if we are serious in our belief that only an informed public can make the right decision about their government, let us ring the buzzer on the current format of the primary debates and let the candidates present themselves as they truly are.