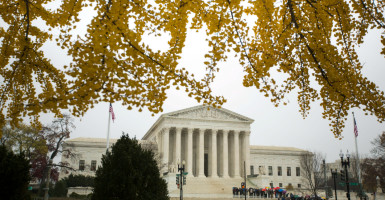 On Tuesday, the Supreme Court heard oral arguments in two important voting rights cases. How the Court rules could have a huge impact on the composition of state legislatures across the country.

Both cases involve the “one person, one vote” guarantee embodied in the Fourteenth Amendment’s Equal Protection Clause. This guiding principle requires that all voters have approximately equal voting power.

The first case of the morning, Harris v. Arizona Independent Redistricting Commission, dealt with state legislative districts drawn by Arizona’s so-called Independent Redistricting Commission. Last term, the Supreme Court upheld the constitutionality of this commission. State legislators had argued that the commission, created by ballot initiative, transferred their redistricting authority to another body in violation of the Elections Clause of the U.S. Constitution.

The Supreme Court disagreed in a 5-4 decision, finding that though redistricting is a legislative function, there is no constitutional barrier to transferring that power to a commission. At one point during Tuesday’s arguments, Justice Antonin Scalia, who dissented in that case, noted the erroneous outcome and the Court’s refusal to abide by the text of the Constitution.

Now, a group of voters has challenged some of the districts drawn by this purportedly independent commission. Arizona voters argue that the commission systematically overpopulated Republican-leaning districts and underpopulated Democratic-leaning districts, particularly ten minority districts. The challengers also say that the legal advice the commission received from a former Justice Department lawyer that they should underpopulate minority districts to comply with the Voting Rights Act was wrong. The result, they claim, is the dilution of votes, particularly in GOP districts, which violates the “one person, one vote” guarantee of the Fourteenth Amendment’s Equal Protection Clause.

During Tuesday’s oral argument, Thor Hearne argued on behalf of the challengers, and Arizona Attorney General Mark Brnovich argued on behalf of Arizona’s secretary of state—an office that was named as a defendant in the suit. Arizona changed its position on this case after Brnovich was elected. He agrees with the challengers that it was a violation of the one-person, one-vote standard to systematically underpopulate and overpopulate districts both for partisan reasons and out of a misinterpretation of the Voting Rights Act, which has never been interpreted to require underpopulating minority districts.

Justice Ruth Bader Ginsburg questioned these claims, saying that the redistricting plan had not prevented Republicans from dominating elections in Arizona. But as Thor Hearne responded, “an incompetent gerrymander does not justify violating the one-person, one-vote standard.”

Decisions in favor of the challengers in both cases could have a major, long-term effect on redistricting and the political make-up of legislative bodies across the country. Democrat-controlled legislative seats tend to have larger numbers of noncitizens than do Republican-controlled seats.

Next up was Evenwel v. Abbott, a challenge to Texas’s state senate legislative districts. Instead of using the citizen voting-age population to draw senate district boundaries with an equivalent population, the Texas legislature used total population, which includes many individuals who are not eligible to vote, including illegal aliens.

Challengers Sue Evenwel (who was at the Court Tuesday) and Edward Pfenninger argue that this violates the one-person, one-vote guarantee by significantly diluting their votes compared to neighboring districts with large populations of illegal aliens. The Court has previously said states are free to choose which population to use in drawing district lines, unless it would otherwise violate the Constitution. At the argument Tuesday, Will Consovoy, a former Supreme Court law clerk, represented the challengers. He argued that the one-person, one-vote standard protects individual voters. Thus, states cannot draw districts that give some voters greater weight than others depending on where they live geographically. Justice Sonia Sotomayor suggested that the Census Bureau’s American Community Survey is not accurate enough to provide detailed information on noncitizens that can be used by states for redistricting. But Consovoy rebutted this claim, pointing out that Texas actually had citizens’ voting-age population data available when it did its redistricting and that the data is used by the Justice Department in all of its Section 2 lawsuits under the Voting Rights Act.

The State of Texas and the U.S. solicitor general’s office both argued in defense of Texas’ districts. Texas Solicitor General Scott Keller argued that this is a states’ rights issue and that it should be left up to the states to choose the population they use in redistricting. When asked by Chief Justice John Roberts why the U.S. Justice Department used American Community Survey data in its Voting Rights Act lawsuits if it was so inaccurate, Deputy U.S. Solicitor General Ian Gershengorn asserted that this data was just one of many factors considered by the Justice Department in its vote dilution lawsuits under the Voting Rights Act.

The justices’ questions Tuesday did not give much of an indication how they will decide either case. Decisions in favor of the challengers in both cases could have a major, long-term effect on redistricting and the political make-up of legislative bodies across the country. Democrat-controlled legislative seats tend to have larger numbers of noncitizens than do Republican-controlled seats. For example, as RealClearPolitics’ senior elections analyst Sean Trende has pointed out, in the heavily Democratic areas of Queens and Kings Counties, New York, only 78 percent of the residents are citizens, whereas in the more Republican Nassau County, 91 percent of the residents are citizens. If the Court finds that Texas violated the one-person, one-vote guarantee, legislative districts likely would be redrawn in parts of the country with large noncitizen populations, with a noticeable shift toward Republicans.

Expect a decision from the Supreme Court by the end of the June.