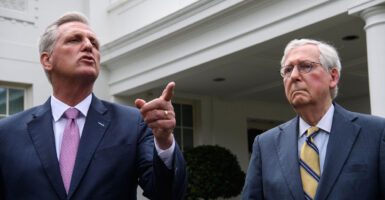 For a party that campaigned relentlessly against Bidenflation this year, you’d think Republicans might use their new power in Washington to make it a priority to curtail wasteful government spending.

Earmarks are the very symbol of “wasteful Washington spending.” And less than a month after voters handed Republicans control of the U.S. House, the party is unreservedly embracing earmarks.

It didn’t have to be this way.

In 2010, just weeks after tea party Republicans seized control of the U.S. House, the party famously banned earmarks to eliminate wasteful spending and their corrupting influence. Even then-President Barack Obama—a big-spending Democrat—supported the ban on earmarks.

Fast forward to Wednesday, just weeks after Republicans once again seized control of the U.S. House, albeit by a much narrower margin. At a closed-door meeting, the House GOP voted overwhelmingly, 158-52, against a proposal to ban earmarks.

The lopsided vote in favor of pork-barrel spending is indicative of Washington’s out-of-touch approach to governing. With our national debt at $31 trillion, inflation around 8%, and no sign of spending restraint from this White House, the American people need some commonsense leaders to say enough is enough.

Rep. Tom McClintock, R-Calif., is one of those leaders. He offered the proposal to ban congressional earmarks, citing many compelling reasons for doing so in a House floor speech.

“History is screaming this warning at us: Nations that bankrupt themselves aren’t around very long,” McClintock told his colleagues. “Republicans must reclaim the mantle of fiscal integrity and fiscal responsibility. And we should start by renouncing the tawdry, corrupt, and irresponsible practice of congressional earmarks.”

In a Washington Times commentary, McClintock painted a contrast to the current Democrat-led House, where this wasteful spending is prevalent: 5,000 congressional earmarks totaling $9 billion were included in this year’s omnibus spending bill. McClintock cited just a few of the more outrageous examples: “feral swine management in Arkansas, a national atomic testing museum in Las Vegas, a Sheep Experiment Station in Idaho.”

Keep in mind that McClintock wasn’t making the case for some radical, far-fetched idea when he took the proposal to the House GOP meeting Wednesday. Up until recently, earmarks had no place in the Republican Party. Even the much-maligned former House speaker, John Boehner, was an ardent opponent.

A few months ago, GOP Leader Kevin McCarthy’s “Commitment to America” made fiscal discipline one of its top priorities. There was even a task force, led by Rep. Patrick McHenry, R-N.C., that had numerous recommendations how to get “America’s fiscal house in order.”

“President Biden and House Democrats are spending like drunken sailors at the expense of American taxpayers,” McHenry said in September. “Due to their reckless fiscal policies, everyday essentials—from groceries to energy—are vastly more expensive than they were when Biden took office.”

That’s true. According to Heritage Foundation economist EJ Antoni, the average American family is $7,400 poorer today than when President Joe Biden took office and went on a spending spree with taxpayers’ money. We’ve witnessed a $4.8 trillion increase in the national deficit during his presidency.

So, it’s baffling that Republicans would embrace more wasteful Washington spending now. It’s also why conservatives need to focus on the next fight before it’s too late.

Already this week, Senate Minority Leader Mitch McConnell, R-Ky., signaled his support for a bloated omnibus spending bill that would allow Biden and his Democrat allies in Congress to cement their agenda through the end of the fiscal year in September.

The alternative, a short-term spending bill until early 2023, is the preferred path for conservative lawmakers like Republican Sens. Mike Lee of Utah, Ted Cruz of Texas, Rick Scott of Florida, and Mike Braun of Indiana. That would give Republicans a seat at the negotiating table once they take control of the House.

“We believe it would be both imprudent, and a reflection of poor leadership, for Republicans to ignore the will of the American people and rubber stamp an omnibus spending bill that funds ten more months of President Biden’s agenda without any check on his reckless policies that have led to a 40-year high in inflation,” the four senators wrote Wednesday in a letter to McConnell.

This is a straightforward approach: No new spending by the Democrat-led lame-duck Congress. Let the newly elected Congress make those decisions.

It makes so much sense that maybe this time Republican leaders will follow through on their campaign promises to get “America’s fiscal house in order” and begin to curtail “wasteful Washington spending.”