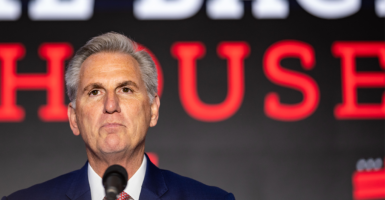 House Republicans will vote soon on whether to bring back the ban on budget earmarks, which are a way for members of Congress to dole out favors using taxpayer money.

Ending earmarks would be an excellent opportunity for the new House majority to combat the wasteful and corrupt political culture that has infected the nation’s capital and is strangling the economy.

Following public ridicule over wasteful pork spending such as the “Bridge to Nowhere” in Alaska, Congress did away with the practice in 2011, thanks to the wave of conservatives elected in 2010 because of the tea party movement.

Unfortunately, the temptation to use other people’s money for personal gain proved too strong for Washington to resist for long, and last year Congress brought back budget earmarks.

These earmarks included reams of woke projects that included funding for left-wing activist groups, initiatives that use the word “equity” as a shield for race-based preferences, and a variety of thinly disguised Green New Deal boondoggles.

We also saw a variety of absurdly wasteful items such as $1.6 million for “equitable growth of shellfish aquaculture industry,” $4.2 million for “sheep experiment station infrastructure improvements,” and $3 million for a Gandhi museum in Houston.

Now that pork is back on the menu,  the House and Senate have proposed thousands upon thousands of additional earmarks in pending legislation. Woke waste in this year’s spending bills includes:

Silly and absurd earmarks include:

When House Republicans meet to set internal rules for the next session of Congress, which begins Jan. 3, they can’t plead ignorance about what tolerating earmarks would mean.

Congress needs to kick earmarks to the curb and finally get overspending under control by putting the federal government on a diet.

There is talk of Congress passing a bloated omnibus spending deal (including earmarks) during December’s “lame duck” period before the House majority shifts to Republicans.

Republicans in both chambers can stop this from happening by refusing to sign off on such a deal and instead giving the incoming House majority a chance to weigh in and negotiate something better early next year.

The alternative—putting House Speaker Nancy Pelosi’s hands on the wheel one last time—certainly is not a good idea.

Fighting waste and inflation while partially draining the swamp by going after earmarks and slush funds would be a big win for America. Republicans in both chambers should do their parts to make it happen.