Earmarks, a Favorite Tool of Central Planners, Are Making a Comeback Under Biden 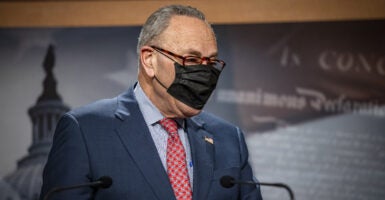 Democrats have put the corruption of earmarks right in front of our faces once again. Pictured: Senate Majority Leader Chuck Schumer, D-N.Y., speaks during a news conference on March 16 after President Joe Biden's economic package set off a heated debate about returning to the use of earmarks. (Photo: Samuel Corum-Pool/Getty Images)

One of the hard-fought victories of the tea party wave that swept Congress in 2010 was the elimination of earmarks in 2011. The new majority wanted to rededicate Congress to the goal of promoting a free society—free, among other things, from the manipulation of central planners. And one of the favorite tactics of central planners is using earmarks to choose economic winners and losers.

Tragically, under Democrat leadership, this Congress has seen the return of earmarks, with well over 2,000 having passed the House of Representatives in the last couple months.

This includes 1,475 earmarks in the House Democrats’ surface transportation bill, and a list of earmarks 123 pages long in just these House-drafted appropriations divisions: Agriculture; Energy and Water; Financial Services and General Government; Interior and Environment; Military Construction and Veterans Affairs; Labor, Education, Health and Human Services; and Transportation and Housing and Urban Development.

While the bitter lessons of history often fade, congressional Democrats have put the corruption of earmarks right in front of our faces once again.

The left will tell you that these “community projects” give members of Congress a straightforward and small-scale way to support their districts. Whenever someone tells you to not care about the impact because it’s small, what they are actually saying is something is wrong.

So, let’s look past the small scale of a single earmark and examine what it is in principle. It is where a single congressman has the power to use money taken from taxpayers to subsidize a particular company, interest, or project. It’s central planning shrunk to the scale of one politician and one subsidized project.

It is easy to see the people helped by an earmark. There will be press releases and photo ops of the lucky interests that the local congressman decided to favor. What is harder to see is the multitude hurt by this process.

Earmarks can be thought of as a redirection of investment. The government didn’t make the concrete, steel, or any number of other goods and services required to actually follow through on the earmark project. These resources were redirected from somewhere else and from someone else.

Without government manipulation, these resources would have been put to productive use for many people through the voluntary action of a free market. We can never know, in full, who was subsidized against by an earmark to a competitor. Nor can we know which areas or industries were denied investment because of an earmark somewhere else.

All earmarks require money, and the resources represented by money, to have been taken—in essence—from all Americans.

Earmarks are, in all cases, a form of wealth redistribution and central economic planning. Now, the left will tell you that the cost and distortion of one earmark is barely noticeable. At what scale does it become noticeable? Does the scale of the theft change the fact that it’s theft?

Keep in mind that the left hasn’t limited its power grab to just earmarks. President Joe Biden’s first budget called for roughly $6 trillion in new federal programs over the next 10 years. His fiscal year 2022 budget would, alone, bring the federal government’s spending to just under a quarter of America’s gross domestic product through fiscal year 2031.

Before the government can spend this much money, it first has to extract it from the American people. This isn’t a promise of investment, it’s a promise to redirect investment. In truth, what the left is offering is a federal government that will redirect nearly a quarter of all the economic value produced by Americans over the next decade.

The same disrespectful ideology that brought back earmarks is to blame for this push to dramatically expand the portion of our economy redirected by the federal government. Earmarks may be a relatively small tool of these would-be central planners, but they are still such tools.

No matter how well-intentioned the congressman, industry group, or other petitioner, what right do they have to the labor of others? What does it mean for our society to normalize the use of the power of law to force other people to pay for your project or industry? Before voting for any earmark or further expansion of government, every lawmaker should answer these questions.

Though each earmark may be relatively small in scale, they represent the normalization of an economy directed at the whim of a handful of federal bureaucrats and politicians. The return of earmarks does not just represent a small issue of congressional corruption. It represents a new front in the fight for our basic natural right to live in a free society.