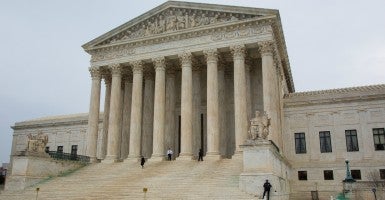 Today, in Arizona State Legislature v. Arizona Independent Redistricting Commission, the four liberal justices joined by Justice Anthony Kennedy (again) refused to follow the Constitution (again) by throwing out a claim that had been filed by the Arizona state legislature challenging a ballot proposition that stripped the legislature of its redistricting authority.

In 2000, a ballot initiative approved by voters in Arizona transferred all redistricting authority from the state legislature to an “independent” redistricting commission, although as Chief Justice John Roberts said in his dissent, the supposedly independent commission “does not seem so ‘independent’ in practice.”

The legislature claimed this initiative violated the Elections Clause of the U.S. Constitution, which provides that “the times, places and manner” of congressional elections “shall be prescribed in each state by the Legislature thereof” unless Congress alters such laws or regulations.

That language couldn’t be clearer, since it very directly and very specifically gives authority over redistricting—which falls within the scope of determining the “times, places and manner” of an election—to state legislatures like that of Arizona.

Yet in an astonishing opinion that denied the legislature’s claim, Justice Ruth Bader Ginsburg spent 35-pages in essence denying that the term “legislature” really means “legislature” and talking about the “policy” implications of having legislative issues and redistricting done by “the people” through the initiative process and redistricting commissions. The majority claims that while redistricting is a legislative function, there is no constitutional barrier to a state’s empowerment of its people by embracing the referendum as a form of lawmaking.

The dominant purpose of the Elections Clause was to empower Congress to override state election rules, not to restrict the way states enact legislation. Supposedly, the Election Clause, by specifying “the Legislature thereof,” does not require assignment of congressional redistricting authority to the state’s representative body.

Roberts correctly calls this “disconnected observations about direct democracy” and “naked appeals to public policy.” While the majority begins “by discussing policy,” Roberts (in a dissent joined by Justices Antonin Scalia, Clarence Thomas, and Samuel Alito) starts “with the Constitution.”

The majority’s entire opinion is spent trying to obscure what they are obviously doing, which is to implement the public policy they like—redistricting commissions—despite the clear constitutional barrier. This, as Justice Scalia says in a separate dissenting opinion, is the “willful product of [their] hostility to districting by state legislatures.”

Roberts points out the total absurdity of the majority’s arguments in the very first two paragraphs of his dissent when he talks about the history of the 17th Amendment and its relationship to Arizona. The 17th Amendment transferred the power to choose U.S. senators from state legislatures to the people. Arizona was the second state to ratify the amendment over a century ago. That amendment was the result of “an arduous, decades-long campaign in which reformers across the country worked hard to garner approval from Congress and three-quarters of the States” as required for the approval of a constitutional amendment:

“What chumps! Didn’t they realize that all they had to do was interpret the constitutional term ‘the Legislature’ to mean ‘the people?’ The court today performs just such a magic trick with the Elections Clause.”

As Roberts says, and as is clear to anyone who reads the majority’s opinion, that opinion “has no basis in the text, structure, or history of the Constitution, and it contradicts precedents from both Congress and this court. The Constitution contains 17 provisions referring to the ‘Legislature’ of a state, many of which cannot possibly be read to mean ‘the people.’” The majority “has no power to gerrymander the Constitution,” although that is exactly what they have done.

Scalia and Thomas also both argue that the Supreme Court did not have jurisdiction over this issue because the state legislature does not have standing to assert a claim against another entity of state government. However, Scalia added that while he would normally add no opinion on the merits, the majority’s opinion is “so outrageously wrong, so utterly devoid of textual or historic support, so flatly in contradiction of prior Supreme Court cases,” that he could not avoid adding his vote “to the devastating dissent of the Chief Justice.”

So Justices Ginsburg, Kennedy, Breyer, Sotomayor, and Kagan, have now adopted the strange and strained view of constitutional interpretation, where the meaning of the word “legislature” depends on how you define it; or in this case, how five justices of the Supreme Court decided to define it. And why not? After all, as Chief Justice John Roberts says, “Why go through the hassle of writing a new provision into the Constitution when it is so much easier to write an old one out?”