Transgender Bathroom Cases the Supreme Court Won’t Hear, and Why They Matter 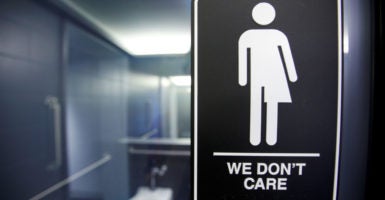 A mother who is part of a lawsuit against the Obama administration’s transgender restroom mandate for schools says she is encouraged by the Supreme Court’s decision to review a similar case.

That case, arising from a Virginia school system, could set a national precedent in the debate over transgender individuals using public facilities according to what they say is their gender identity. It may determine the fate of more than a dozen lawsuits involving the same issue across the country.

The Supreme Court announced Friday that it would hear issues in the case involving Gavin Grimm, 17, a transgender student who was born female but identifies as a male. Grimm wants to use the boys’ restroom at Virginia’s Gloucester High School.

An Illinois parent involved in a similar suit told The Daily Signal she is “encouraged” by the Supreme Court’s decision to take up the case of G.G. v. Gloucester County School Board and hopes the high court will honor the rights of parents and minor children by “reinstating basic privacy and dignity in our public schools.”

The mother, who has a child at Fremd High School in Palatine, Illinois, asked to remain anonymous because of the sensitive nature of the lawsuit there. She is part of a group of 51 families who sued the Obama administration over its interpretation of federal law known as Title IX.

“Girls should never be forced to undress in the presence of young men,” she said in an email to The Daily Signal, adding:

There are sensitive solutions for students who are struggling with these issues that don’t violate the privacy of many other students at the school. Schools will always have a duty to protect the privacy and preserve the dignity of all children because every child matters. We hope the [Supreme] Court remembers this.

While the Illinois case won’t be heard before the Supreme Court this term, legal experts say that lawsuit—and others like it—had an important influence on the court’s decision to take up the transgender bathroom issue.

“[These cases] have shown that there’s a split on this issue and there is likely to continue to be one,” said Matt Sharp, a lawyer at the conservative Alliance Defending Freedom, which is representing the 51 families in Palatine. “I think if every one of these cases had gone the wrong way, I don’t know that the court would have taken the Gloucester case.”

The Gloucester County School Board, located in Virginia, says it’s pushing back on Grimm’s request to use the boys’ restrooms at Gloucester High School due to privacy concerns of other students. Instead, the school board offered private facilities for Grimm to use.

Lawyers for the school board argue that the Obama administration overstepped its legal authority when it threatened to withhold federal funding if the school does not comply with the administration’s interpretation of Title IX.

Title IX is the federal law that bans discrimination on the basis of sex in any federally funded education program. Whether Title IX applies to transgender students is at the heart of the transgender bathroom debate in schools.

In May, the Obama administration issued a “Dear Colleague” letter to schools nationwide arguing that it does, and that schools must allow transgender students to use restrooms, locker rooms, and other sex-specific facilities based on their gender identity.

The Daily Signal sought comment from the American Civil Liberties Union, which represents Grimm in the Gloucester County case, but a representative did not reply before deadline.

Parents and school boards across the nation objected to the Obama administration’s mandate, arguing that Title IX wasn’t intended to apply to a person’s gender identity. They argued that allowing students to use the restrooms and locker rooms based on their gender identity rather than biological sex would violate the constitutional privacy rights of other students.

Nationwide, at least 13 other lawsuits address the same issue. So far, courts have been divided in their rulings. Those cases include:

Most likely, legal experts say, these cases will be put on hold until the Supreme Court issues its decision in the Gloucester County School Board case.

Pointing to the stay the Supreme Court issued in August, which allowed the Gloucester school district to keep restrooms and locker rooms separated by biological sex, they predicted that other school districts would follow suit.

“Because the Supreme Court ordered that male and female bathrooms be preserved until it addresses the question on the merits, only an ideologically driven lower court would impose new gender identity policies in schools ahead of the decision,” said Roger Severino, director of the DeVos Center at The Heritage Foundation.

“Additionally, a federal court has ordered the [Obama] administration to stop threatening schools with funding cuts for not adopting radical new shower, bathroom, and locker policies, so the mischief should be contained until the Supreme Court decides,” Severino told The Daily Signal.

This means the situation will not change in North Carolina, where a new law known as House Bill 2 sparked a national controversy during which the NCAA decided to relocate some of its national championship games from the state.

The North Carolina law mandates that people use bathrooms and locker rooms in schools, public universities, and other government buildings based on the gender listed on their birth certificates.

A federal judge recently issued an injunction blocking the University of North Carolina from enforcing HB 2 and requiring the school to open its restrooms and locker rooms to students based on their gender identity.

“If the [Supreme] Court rejects the administration’s radical gender theory in the Gloucester case, it will be a death blow to the government’s suit against North Carolina because it is based on the identical legal theory,” Severino said.

A federal judge in Texas reached the opposite conclusion in a similar case brought by a Texas school district, issuing a nationwide injunction against the Obama administration’s transgender bathroom mandate and blocking enforcement.

The Supreme Court decided to review issues in the Grimm case in Gloucester County, Virginia, after the U.S. Court of Appeals for the 4th Circuit ruled in the transgender student’s favor.

Looking at Supreme Court statistics, Sharp of Alliance Defending Freedom said, he is cautiously optimistic about the outcome.

“If they take a case, the odds are they’re going to reverse the decision below,” Sharp said, adding:

It’s not 100 percent, obviously, but generally the court’s not going to take a case and say the lower court got it right. That’s part of my cautious optimism with the Gloucester case—the odds are they’re going to say the 4th Circuit got it wrong in some regard because otherwise they would have just let that decision stand and waited until some other cases came up.

However the Supreme Court decides, the ruling could be irrelevant if Congress votes to add gender identity to Title IX. That “would be incredible hard,” Sharp said, adding:

Yes, there’s always a possibility that a Democrat Congress can turn around and do that—that’s always been a risk—but I think it becomes harder and harder every year for them to do. I think one of the reasons is, there’s not discrimination based on sexual orientation or gender identity going on. There’s not a widespread problem … there’s no allegation that Gavin Grimm is being denied an education opportunity.

But if Congress did act to add gender identity to Title IX, Sharp said, “at least it went through the Democratic process and not through an agency sending a letter to every school and mandating it.”

“I wouldn’t like it,” the lawyer said, “but at least it’s democracy in action.”