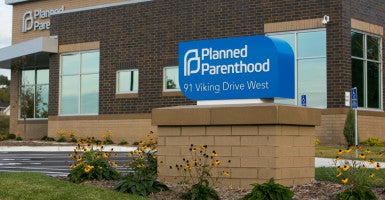 Those attempting to end taxpayer funding of Planned Parenthood through reconciliation may be facing an obstacle. (Photo: Kris Tripplaar/Sipa USA/Newscom)

Those following the debate over Planned Parenthood funding and recent efforts to repeal Obamacare may have heard or read about something lately called the “Byrd Rule.”

As if the budget and lawmaking process in Washington weren’t already hard enough to follow, add this to the list of terms and legislative rules one must understand.

Thankfully, I know someone who can help us peel away the layers of this legislative onion: Heritage’s director of policy promotion, Rachel Bovard. As an expert on Senate rules, her answers to my questions below provide a crash course on the history of the “Byrd Rule,” how it’s supposed to be used, and how it’s currently impacting the Planned Parenthood debate.

Q:     Let’s start with the basics. What is the Byrd Rule, exactly?

A:     The Byrd Rule is a budgeting rule in the Senate named after its sponsor, the late Sen. Robert C. Byrd, D-W.V. It was passed in 1985 as part of the Budget Act as a means to ensure that any amendments or provisions attached to the budget reconciliation process dealt only with budgetary matters.

Q:     OK, let’s take a step back before going forward. What is reconciliation?

A:     Welcome to the world of congressional budgeting procedures! The simplest way of explaining reconciliation is that it is an optional budget process reserved for legislation that would have a significant impact on taxes or entitlement spending. Reconciliation is a tool to align the spending, revenue, and debt levels in the budget resolution with deficit reduction goals in Medicare, Medicaid, and other types of mandatory spending (that is, spending that is on auto-pilot and not subject to annual renewal by Congress).

The most important thing to know about reconciliation is that it can pass with a simple majority of 51 votes. This is a very meaningful factor in the Senate, where most things have to garner 60 votes to overcome the filibuster. Because of this fact, using budget reconciliation is the legislative equivalent to breaking out the big guns.

Since the 1980s, reconciliation has been used approximately 20 times to steer controversial legislation through the Senate—for example, President Bill Clinton’s 1994 deficit reduction and tax package, President George W. Bush’s major tax cuts, and, most recently, the Democrats used reconciliation in 2010 to implement the employer and individual mandates that are part of Obamacare.

Q:     Now, back to the Byrd Rule—how does it interact with reconciliation?

A:     The intention of the Byrd Rule is to ensure that the reconciliation process remains focused on budgetary matters and is not used to advance non-fiscal policies. To do this, the Byrd Rule provides a point of order against material defined to be “extraneous” to budgeting.

Remember, reconciliation was created to address fiscal policy. So if a provision is not about spending (outlays), taxing (revenues), or about budgeting at all (a condition defined in the Byrd Rule as “merely incidental” to budgeting), it will likely be violating the Byrd Rule. Additionally, the Byrd Rule prohibits provisions that increase the deficit beyond the current budget window covered by the reconciliation measure, or any provisions that would change Social Security.

Like many Senate rules, however, the Byrd Rule is not self-enforcing—individual senators must apply the rules themselves. If a senator chooses to challenge an amendment or provision that he or she feels violates the tenets of the Byrd Rule, the senator raises a point of order. The chair of the Senate, traditionally a member of the majority party, then rules for or against the objection. If the chair sustains, or agrees with, the objection, then the offending section is removed from the bill or amendment.

However, as with all points of order in the Senate, the chair’s ruling can be appealed. If the chair rules against a senator’s point of order, that senator can then ask for a vote by the full Senate to override the decision. It requires 60 votes in the Senate to overturn the ruling of the chair.

Q:     How does the Byrd Rule impact the effort to defund Planned Parenthood?

A:     Many conservatives have discussed using reconciliation as a means to defund Planned Parenthood. The House recently passed a bill that contained a one-year moratorium on federal funds to Planned Parenthood. The Senate parliamentarian (a staffer who advises the Senate on the application of Senate rules and precedents) has suggested that the provision needs to be changed to avoid triggering a Byrd Rule point of order. So, technically, a version of this provision may be able to survive in a reconciliation bill, though we don’t know yet how it will look or how far it will go.

(Since publishing our piece, a few readers have contacted us to say the Senate parliamentarian has indeed approved the provision in the House bill defunding Planned Parenthood, basing their views on this news article.  However, our discussions with Senate staff indicated that the parliamentarian ruling refered to in this article was based on a modified version of the original defund provision – just as we suggested would have to occur for it to pass muster under Byrd. The parliamentarian had previously indicated that the defund provision that came over from the House was in fact Byrdable. The new version has been modified to comply with Byrd, and will be included in a Senate substitute amendment to the House bill.  We have not seen final text yet, so it’s not clear how the defund language had to be modified or restricted to comply with the Byrd rule.)

Q:     Are there other ways besides reconciliation to defund Planned Parenthood?

A:     Yes. Our colleague Paul Winfree explained recently that reconciliation is a complicated way to get at defunding Planned Parenthood. As discussed, the provision already needs to be revised to comply with the Byrd Rule, and that may limit the overall impact of the measure.

There is an easier, and some would argue, cleaner way to defund Planned Parenthood through the discretionary funding process.

According to Winfree, the way to successfully defund Planned Parenthood is by targeting the bills that fund government operations—appropriations bills, or in a continuing resolution (CR). Planned Parenthood receives a significant amount of money in these bills, which Heritage expert Sarah Torre details here. The Senate will likely consider an omnibus spending bill on or before Dec. 11. Congress should ensure that Planned Parenthood does not receive funds in this legislation.