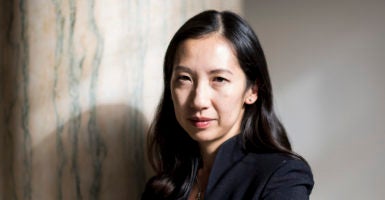 “We were engaged in good faith negotiations about my departure based on philosophical differences over the direction and future of Planned Parenthood," said Dr. Leana Wen in a tweet. (Photo: Bill Clark/CQ Roll Call)

Planned Parenthood removed Leana Wen from her position Tuesday after she had served only 10 months as president.

The Planned Parenthood board voted Wen out of her position Tuesday and temporarily replaced her with the co-founder of the progressive Perception Institute, Alexis McGill Johnson, according to The New York Times.

“I am proud to step in to serve as acting president and facilitate a smooth leadership transition in this critical moment for Planned Parenthood and the patients and communities we serve,’’ McGill Johnson said in a statement, according to the Times.

“I thank Dr. Wen for her service and her commitment to patients.”

Wen became president of Planned Parenthood of America in September, the Times reports.

Since then, she has advocated unrestricted access to abortion and fought back against many states’ restrictive abortion legislation.

“I just learned that the @PPFA Board ended my employment at a secret meeting,” Wen tweeted Tuesday. “We were engaged in good faith negotiations about my departure based on philosophical differences over the direction and future of Planned Parenthood. My statement to come shortly.”