Why Reconciliation Can’t Be Used to Defund Planned Parenthood 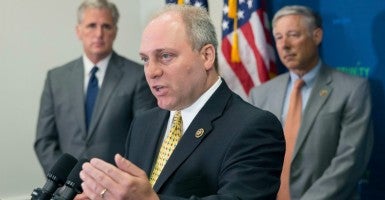 The resolution produced a path to balance by fiscal year 2024 in large part because of an assumption that the Affordable Care Act (ACA)’s coverage expansion would be repealed, reducing spending and the deficit by almost $2 trillion over the next 10 years.

Sections 2001 and 2002 of the concurrent resolution include reconciliation instructions to committees in the Senate and House that provide a fast-track budget process to consider legislation that meets specifications laid out in the guidance agreed upon by Congress and provided by the resolution.

The conference agreement unequivocally “affirms the use of reconciliation for the sole purpose of repealing the President’s job-killing health care law by instructing only those committees with jurisdiction over the health-care related provisions in the Patient Protection and Affordable Care Act of 2010 (Public Law 111-148) and the Health Care and Education Reconciliation Act of 2010 (Public Law 111-152).”

Now, however, members of Congress are backing off their commitment to use reconciliation “for the sole purpose of repealing” the ACA.

According to recent statements from House Majority Whip Steve Scalise, R-La., the reconciliation process should be used to defund Planned Parenthood.

House Appropriations Chairman Tom Cole, R-Okla., would also prefer that reconciliation be used to bust the Budget Control Act (BCA)’s caps on discretionary spending and make changes to Social Security (among other things).

However, there are significant procedural barriers that would likely prevent any attempt to accomplish these wish lists using the reconciliation process.

First of all, provisions of reconciliation bills that do not change federal outlays or revenues are not permitted pursuant to section 313 of the Congressional Budget Act (known as the Byrd Rule).

A bill increasing the discretionary spending caps established by the Budget Control Act would change budget authority but not outlays.

This also prevents reconciliation bills from making changes to discretionary spending programs (i.e., programs that are authorized but whose funding is subject to future appropriation).

This is a problem for those who want to use reconciliation to fully defund Planned Parenthood, as the organization and its affiliates receive discretionary funds through the Title X Program and a number of other sources.

Therefore, the most appropriate place to reduce federal spending on Planned Parenthood would be through the bills funding government operations, such as a continuing resolution (CR).

Even addressing direct spending for Planned Parenthood in a reconciliation bill (for instance, funding received through the Medicaid program) faces difficult constraints.

In other words, provisions in reconciliation bills cannot be included if the primary purpose is to advance a certain policy. Rather, reconciliation is reserved for provisions included with the purpose of reducing the deficit in a way that reflects assumptions made by the budget resolution.

Although addressing federal funding for groups as specific as Planned Parenthood might be worthy of action by Congress, it clearly does not meet either the test of repealing the ACA or being primarily budgetary.

Finally, both the Byrd Rule and section 310 of the Congressional Budget Act prohibit changes to the Social Security program, which is considered “off-budget.”