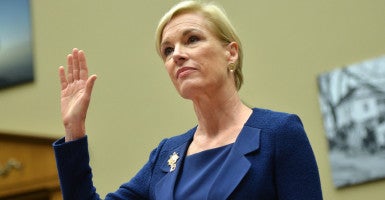 Senate Republicans are about to consider a House bill defunding Planned Parenthood and portions of Obamacare after receiving a green light from the official who advises on proper procedure. But, experts caution, the bill may face significant roadblocks.

A spokesman for Majority Leader Mitch McConnell said Tuesday that the parliamentarian—the officer overseeing Senate procedure—confirmed that the House bill on the two hot-button issues “can proceed under the rules of reconciliation.”

Republicans hope the legislation will neutralize the threat of a Democrat filibuster and move more easily through the Senate as a reconciliation measure. Only by addressing government spending and revenue can a bill receive special reconciliation status, which requires just 51 votes to pass instead of the regular 60.

In the Senate, such measures are governed by a procedural statute called the Byrd rule. They must be budgetary in nature to qualify for special status, and any significant policy reforms must be “merely incidental.” If a bill fails this test, it must attract 60 of the Senate’s 100 votes to pass.

In addition to defunding Planned Parenthood, the House bill would end Obamacare’s individual and employer mandates requiring the purchase of health insurance. It also would repeal taxes on medical devices and so-called “Cadillac” insurance plans.

Efforts to defund the nation’s largest abortion provider have gained momentum at the state and federal levels since undercover videos released over the summer by the Center for Medical Progress showed Planned Parenthood officials discussing the sale of body parts from aborted babies. The organization says it currently receives about $528 million a year in government funding.

The Senate parliamentarian’s OK doesn’t mean the bill is out of the procedural woods. It still may be susceptible to a challenge under the Byrd rule by Democrats and a filibuster to prevent passage.

According to one Hill veteran, the legislation is being passed along with problems that still need fixing.

Paul Winfree, director of The Heritage Foundation’s Roe Institute for Economic Policy Studies, says it’s not unusual for a parliamentarian to sign off on such a measure.

“Typically, the parliamentarian will allow the Senate to move ahead on a reconciliation bill with ‘corrosive’ provisions, if they can be amended before final passage,” Winfree told The Daily Signal. He added:

The Senate parliamentarian’s guidance is advisory, but in this case it seems that she believes it is within the rules of reconciliation to restrict Medicaid payments to a special class of providers [such as Planned Parenthood]. However, the intent of the Byrd rule is to prevent making significant policy changes when the budgetary effects of those changes are trivial in comparison. In my view, that is exactly what the provision targeting Planned Parenthood funding does.

Republicans already plan to offer a substitute amendment to address provisions repealing the individual and employer health insurance mandates that they say may violate the rules.

When the Senate begins debate on the Obamacare repeal bill, there will be a substitute amendment that preserves the provisions of the House-passed bill, while ensuring that the underlying bill complies with rules that apply only in the Senate.

During that amendment process, the House provision defunding Planned Parenthood could change drastically. Sen. Lisa Murkowski, R-Alaska, who is pro-choice, already has said she’ll vote to take up the House bill.

“The way it has been discussed in our conference is that there are going to be many opportunities for amendments,” Murkowski told The Hill. “If the Planned Parenthood piece stays in, I’m sure there will be amendments to take it out.”

Once the House bill is on the Senate floor, Democrats could raise a point of order questioning whether specific provisions violate the rules and send the bill back to the parliamentarian for review.

Even if the bill qualifies, it might not receive the 51 votes needed to pass even though Republicans hold 54 seats in the Senate.

Some Republican senators already have begun splitting away. A trio of senators pledged to oppose any legislation that falls short of complete repeal of Obamacare, formally known as the Affordable Care Act.

“Each of us campaigned on a promise to fully repeal Obamacare,” Sens. Mike Lee, R-Utah; Marco Rubio, R-Fla.; and Ted Cruz, R-Texas, said in a joint statement last month. “If this bill cannot be amended so that it fully repeals Obamacare pursuant to Senate rules, we cannot support this bill.”

A bill with language to defund Planned Parenthood also likely would scare off some Republicans.

In addition to Murkowski, Sens. Susan Collins, R-Maine, and  Mark Kirk, R-Ill., are expected to vote against any measure stripping taxpayer funding from the organization.