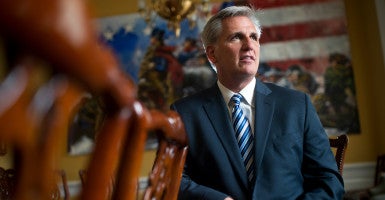 Fox News’ Sean Hannity pressed McCarthy hard on conservative frustration that accelerated Boehner’s demise, repeatedly pointing to the House’s failure to unravel Obamacare despite holding majorities in both chambers and its “power of the purse” authority.

“You voted 50 times to repeal Obamacare, but there’s a constitutional power you guys have that you don’t use, and it seems all Obama has to do is mention, ‘We’re going to shut down the government and blame Republicans,’” Hannity said.

McCarthy promised a different course should he clinch the speakership in October.

He committed to pursue the string of battles conservatives have waged against congressional Democrats and President Barack Obama, including defunding Obamacare, Planned Parenthood, and executive “amnesty” and stopping the Iran nuclear agreement.

He did not detail specifics but said he would lead the fight with a “strategy” and a greater inclusion of the conservative lawmakers who helped topple Boehner from the speakership.

“Every Republican should have a voice here, and that’s going to be the fundamental difference: I believe in the bottom-up strategy,” McCarthy said.

Hannity began the interview noting a poll that found that 60 percent of Republicans feel betrayed by their party in Congress. McCarthy said he was one of them.

“Look, we need to change this country. Too many people in Washington care about power and institutions and not about changing the lives of every day,” he said. “The culture I’m going to change here is I’m going to make members closer to who they represent [so] that the people believe this is their government.”

But McCarthy noted that not all was stagnant under Boehner’s leadership. When asked to rate the speaker, McCarthy gave him a B-.

“You may disagree with me, but he won a majority, we have got the highest margin we’ve ever had before. We lowered the deficit,” McCarthy said. “There is a lot more—we passed 300 bills this year. If you look into the Senate, they haven’t moved.”