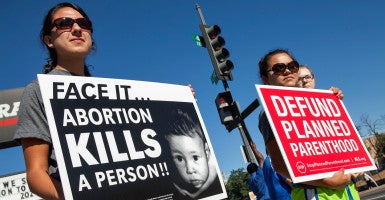 The House approved a budget reconciliation bill Friday that would repeal portions of Obamacare and cut federal funds to Planned Parenthood for one year.

The legislation, called the Restoring Americans’ Healthcare Freedom Reconciliation Act, was passed in a 240-189 vote.

One Democrat, Rep. Collin Peterson of Minnesota, voted in favor of the bill, and seven Republicans voted against it.

Some felt that dismantling Obamacare in pieces wasn’t sufficient given that Republicans promised to completely repeal Obamacare.

Other Republicans argued that the legislation was a step in the right direction, and should move forward.

Rep. Tom Price, R-Ga., chairman of the House Budget Committee, said in a statement the bill “repeals the most coercive components of Obamacare—eliminating onerous taxes, the individual and employer mandates, an Obamacare slush fund, and lifting unnecessary burdens on employers and employees.”

Price noted the legislation would increase funding for community health centers while eliminating government support for Planned Parenthood, which is under investigation after a series of undercover videos related to its role with aborted baby body parts.

“Today’s House vote cuts Planned Parenthood’s Medicaid funding—the most significant portion of the abortion business’s overall $528 million a year in taxpayer funding. Women have the most to gain from congressional action to reroute these tax dollars to community and rural health centers, which provide comprehensive health care services to women, but do not abort the lives of unborn children and harvest their body parts,” Dannenfelser said.

Some conservatives called the House’s action a “show vote” that won’t go anywhere in the Senate.

“The House reconciliation bill includes a number of vulnerable provisions that will be tough to get past the Byrd rule unless they are addressed,” said Paul Winfree, director of the Thomas A. Roe Institute for Economic Policy Studies at The Heritage Foundation.

“Ultimately, I suspect the bill will look very different if it gets through the Senate as a reconciliation bill,” Winfree said.