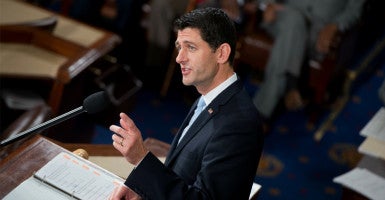 Rep. Paul Ryan addresses the crowd before being sworn in on the House floor as the 54th Speaker of the House, Oct. 29. (Photo: Tom Williams/CQ Roll Call/Newscom)

In an interview with Dana Bash on CNN’s “State of the Union,” Ryan said he wants to ensure that Republicans are an “effective opposition party,” which requires “being honest with people upfront about what it is we can and cannot achieve.”

“But we also have to push issues where we can push issues. We have to speak truth to power,” he said. “We have a president that isn’t willing to listen, that isn’t going to sign lots of our bills into law; we have a Senate that has a very difficult process when it comes to actually getting bills voted on, so knowing that we have those constraints, we have to operate within those constraints.”

Ryan, R-Wis., called the House’s newly formed select panel an “important” aspect of the investigation into Planned Parenthood, which is under fire after a series of undercover videos depicted the organization’s business practices.

“I don’t think Planned Parenthood should get a red cent from the taxpayer. I’ve always believed that, even before these disgusting videos came out,” Ryan said.

Profiting from the sale of human organs—including those of the unborn—is a violation of federal law in the United States.

Planned Parenthood has denied making a profit from illegal transactions, and the organization recently announced that it will no longer accept “reimbursement” for donations of body parts to researchers.

Cecile Richards, Planned Parenthood’s chief executive, recently wrote in a letter to Ryan that she hopes, as the new House speaker, he will ensure that investigations into her organization are “fair and impartial.”

“It is increasingly difficult to understand the basis for the ongoing investigations into Planned Parenthood. We have fully cooperated with the committees that have contacted us,” Richards wrote.

Dan Holler, communications director of Heritage Action for America, told The Daily Signal that “Congress will continue investigating Planned Parenthood, but pro-life lawmakers do not need another investigation to know that the organization is morally corrupt and undeserving of taxpayer funds.”

In a statement following Ryan’s election, Marjorie Dannenfelser, president of the Susan B. Anthony List, said that “Paul Ryan is one of the best communicators we have in the fight to defend life.”

“His clarity, compassion and thoughtfulness on this issue will serve him well as he takes on the challenge of speakership,” Dannenfelser said.

Dannenfelser added that both Ryan and his policy team are committed “to protecting women and unborn children from the horrors of abortion as well as defending conscience rights.”