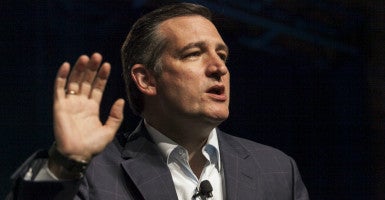 This is not a “grand bargain” or negotiation—it is complete and utter surrender.

John Boehner’s golden parachute will certainly cement his legacy, but it is a slap in the face to conservatives who rose up across the country in 2014 on a promise that we would stop the disastrous runaway spending and debt in Washington. We now have a GOP Congress, but no one watching this budget surrender would know it.

For anyone wondering about the source of the American people’s volcanic frustration with Washington, one need look no farther than so-called “Republican” majorities in both houses of Congress increasing the budget and our debt by more than $400 billion.

It’s ridiculous, deceitful, and a disgrace.

Make no mistake: the speaker’s golden parachute is a victory for the Washington cartel, for the politically connected elite, and for big business and lobbyists who get in bed with career politicians to grow government.

Unfortunately, it is a loss for single moms, for Hispanics and African-Americans, for small businesses, and for all of those hardworking Americans who can’t afford expensive lobbyists and are hurting the most under the Obama administration’s failed policies.

No one in Congress who campaigned on stopping Obama’s runaway spending and debt should vote to advance or pass this golden parachute that gives Obama and Boehner nearly everything they want.

This budget completely annihilates the 2011 budget caps, the one successful attempt at spending restraint in the Obama era.

We should never default on our debt, but this deal suspends the debt ceiling, saddling future generations with the bill for our reckless spending, while making no meaningful reforms to the programs driving our runaway spending.

Obama and Boehner are heading into retirement. Some people get a gold watch. Obama and Boehner are settling for at least $80 billion in additional spending and debt above the budget caps. Unfortunately, our children and grandchildren will be left to foot the bill long after they are gone.