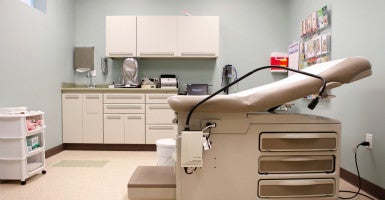 A general view of an exam room is seen inside the new Planned Parenthood facility in Houston, Texas, May 20, 2010. The Texas Office of the Inspector General served subpoenas for clinic records at several Planned Parenthood centers in the state on Thursday. (Photo: Aaron Sprecher/EPA/Newscom)

Inspectors from the Texas Office of the Inspector General served subpoenas for clinic records at several Planned Parenthood centers in the state on Thursday, the organization said.

Johnson, now a pro-life activist and the founder and president of And Then There Were None, said that when regulators and health inspectors turn a “blind eye” to abortion clinics, women and children are “left to die.”

“I am thankful for the leadership of Gov. Abbott and his team who have worked to protect women and babies, and support true healthcare options,” Johnson said.

Abbott, a Republican, said in a statement that the “gruesome harvesting of baby body parts by Planned Parenthood will not be allowed in Texas and the barbaric practice must be brought to an end.”

Planned Parenthood faces allegations raised by undercover videos released by the Center for Medical Progress that the organization is making a profit off selling the body parts of aborted babies.

Spokespersons for Planned Parenthood have denied profiting from illegal transactions, and the organization recently announced that it will stop accepting “reimbursement” for donations of body parts to researchers.

“Representatives from the Texas Office of Inspector General showed up at Planned Parenthood health centers in Brownsville, Houston, Dallas and San Antonio looking for an excuse to take health care away from thousands of women and men who rely on Planned Parenthood for preventive care—but what they will see is professional, compassionate and quality health care,” Gutierrez said. “Despite their efforts to distort the truth, health care—no matter what—is what happens at Planned Parenthood.”

A spokesman for the Office of Inspector General at the Texas Health and Human Services Commission did not immediately return The Daily Signal’s request for comment.