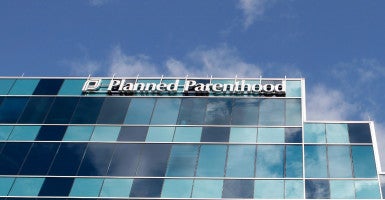 In fact, she is one. A former clinic director at Planned Parenthood, Johnson is now the founder and president of And Then There Were None, a ministry to help abortion workers quit the industry.

One day while she was still working for Planned Parenthood, Johnson was asked to assist during an abortion. She was horrified by what she saw.

In an interview with The Daily Signal shortly before the sixth anniversary of the day she quit, Johnson said that the recently released undercover Planned Parenthood videos weren’t difficult to watch, because she had “lived that life,” but that “it was difficult to see the faces of the people that I knew.”

Johnson’s former Planned Parenthood affiliate was featured in one of the videos released by the Center for Medical Progress.

Johnson said that knowing she herself could have been one of the workers on the tape reaffirms her mission to rescue workers from the abortion industry.

“I pray for all workers to leave, but especially the ones that I knew, that I worked with,” Johnson said. “I think now is an opportunity for the pro-life movement to re-evaluate our attitude toward workers. I’m glad the information is out there, but I’m concerned about where we’re going to go from here. I’m concerned about the post-abortive women who haven’t healed; I’m concerned about the workers who are still in there. Nobody is beyond the power of conversion.”

She knows firsthand what it’s like to leave the abortion industry.

“It was a scary time. I made a lot of money at Planned Parenthood. I mean, that sounds so selfish, but it was scary to think about what we were going to have to sacrifice. It was scary to think about leaving all my friends. That was probably what I was most scared about, even more than the money, was about starting over. They were the only people I was ever around, they were my only friends. I worked 60, 70 hours a week, so I didn’t have friends outside of my work. I realized that when I left, to these people, I was going to become their enemy. I didn’t plan on going public with my story ever, Planned Parenthood forced me to, but I knew that because I wasn’t touting their rhetoric anymore, that I would be their enemy.”

After Johnson left Planned Parenthood’s employment, they filed a lawsuit against her, which was later dismissed.

“It was a very anxiety-provoking time. I was nervous. And it was almost embarrassing, too, because I knew that if I left, I was going to have to admit to many people that I had been wrong. And not that I had been wrong for a few months, but I’d been wrong for eight years. And then there was the realization that one day I’m going to have to face the fact that I helped to take the lives of about 20,000 babies. And that was difficult to think about. I didn’t want to think about it.”

Despite her fear, Johnson realized she had to leave.

“I tried really, really hard to stay at Planned Parenthood,” Johnson said. “I tried really hard to make it OK in my mind, to try to say to myself, ‘OK, let me try to justify what I saw on that ultrasound screen. Let me try to justify the lies that they had told me; let me try to make this OK.’ But eventually I just couldn’t. I couldn’t make it OK. I knew I was going to have to leave. But then, when I made the decision, I felt very empowered. Still a little nervous, but very empowered. I felt that I was making the right decision.”

“The actual day I quit my job, Oct. 6, 2009, I remember packing up my stuff, I didn’t feel nostalgic. I felt like I have got to get out of here,” Johnson said. “I felt lighter. I had so much in front of me that was uncertain, but I just felt this incredible burden lifted from me.”

She wrote a book, “Unplanned,” about her experience at Planned Parenthood and her decision to leave. Shortly after the book’s publication, Johnson started receiving emails from abortion clinic workers who also wanted to leave the industry.

“They needed help, and so my husband and I, just as best as we could, helped them financially transition out of the industry, you know, get help, get plugged into a pro-life community,” Johnson said. “Seventeen workers left during those few months.”

Johnson started looking for a national pro-life organization that could assist clinic workers looking to leave the industry. She couldn’t find any.

“That has been the missing piece of the puzzle,” Johnson said. “You know, we’ve got all these great organizations reaching out to students, reaching out to post-abortive women, pregnancy centers, but nobody was proactively reaching into these clinics to try to rescue these workers and get them out.”

Johnson decided to start one herself and founded And Then There Were None.

“We thought if we had 10 workers leave in a year, that would just be crazy successful,” Johnson said. “We’ve been at this for three years and we’ve had 181 abortion clinic workers come to us, and of that 181, six of them have been abortionists who have left their jobs and who are now working to defend life. Clearly, they needed someone to be their advocate.”

Johnson said the most powerful part of the ministry is its ability to connect former clinic workers with “other people who have lived the life that they have lived.”

“Somebody is going to reach out to you who has been in your shoes.”

According to Johnson, the pro-life movement must fight the abortion industry from within.

“We don’t have workers coming to us who are staunchly pro-choice. We don’t see those workers. Not yet. They have to be sort of at this brink of conversion. But it is a journey. A lot of times, we have workers who will leave because they’ve seen something terrible, like me, and there was this moment where they thought, ‘I cannot do this anymore.’ Some of them, they never wanted to be doing abortions in the first place, but they needed a job, and Planned Parenthood was paying well.”

“But there are a lot of workers who are in the industry who are right on the brink of saying, ‘I don’t know if I can do this anymore.’ They’re starting to see the reality of the abortion industry, they’re starting to see what’s really taking place inside the industry, and they’re just right on the edge of leaving. But they’re scared. They’ve got kids, they’re single parents, and so they just need somebody to reach into their lives and to say, ‘We love you, we care about you, and we want to help you.’ Once they see that love and concern, I believe that’s what brings about that conversion moment for them.”