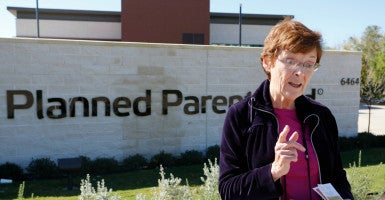 Marian Honquest, who is opposed to abortion, talks to a reporter in front of Planned Parenthood in Fort Worth, Texas. Planned Parenthood affiliates in Texas were notified Monday that they are no longer eligible to participate in the state's Medicaid program. (Photo: David Kent/MCT/Newscom)

“Texas has stepped forward and shown its unyielding commitment to both protecting life and providing women’s health services,” Abbott said in a statement. “The gruesome harvesting of baby body parts by Planned Parenthood will not be allowed in Texas and the barbaric practice must be brought to an end. As such, ending the Medicaid participation of Planned Parenthood affiliates in the State of Texas is another step in providing greater access to safe healthcare for women while protecting our most vulnerable—the unborn.”

The Office of Inspector General at the Texas Health and Human Services Commission sent a letter to Texas’ Planned Parenthood affiliates notifying them that they are no longer eligible to participate in the state’s Medicaid program due to evidence of program violations.

“Our decision to terminate you and all affiliates in Texas finds support in the extensive video evidence filmed at your facility and other Planned Parenthood affiliates across the country,” the letter states.

The videos raised allegations that Planned Parenthood affiliates are selling aborted babies’ body parts to researchers for profit. Trafficking human body parts is a felony in the United States. Planned Parenthood spokespersons have denied participation in illegal transactions, and recently announced they will no longer accept “reimbursement” for donations to researchers.

“We have begun terminating your enrollment because, based on the evidence outlined below, you are liable, directly or by affiliation, for a series of serious Medicaid program violations,” the letter states. “The State has determined that you and your Planned Parenthood affiliates are no longer capable of performing medical services in a professionally competent, safe, legal, and ethical manner.”

The letter also notes that there are a great deal of alternative clinics to Planned Parenthood in Texas.

“Texas is right to recognize that taxpayer money should go to fund local community health centers, not to subsidize a scandal-ridden, billion-dollar abortion business,” Kellie Fiedorek, legal counsel for Alliance Defending Freedom, said in a statement. “Texans shouldn’t be forced to give their money to Planned Parenthood, which was caught in authenticated undercover videos trafficking aborted babies’ body parts and has a long track record of abusive and potentially fraudulent billing practices and repeated failures to report the sexual abuse of girls. That tax money should be redirected to trusted health care providers, not given to the abortion industry.”